The Fulbright U.S. Scholar Award has been on Dr. Youssef Sari’s radar for some time as an important step in advancing his academic career and his search for therapeutic agents to treat patients suffering from drug addiction.

And when Sari received the news that the U.S. Department of State’s Bureau of Educational and Cultural Affairs and the Fulbright Foreign Scholarship Board selected him for the prestigious award for the fall semester, The University of Toledo professor and vice chair of pharmacology and experimental therapeutics, and professor of medicinal and biological chemistry in the College of Pharmacy and Pharmaceutical Sciences was thrilled. 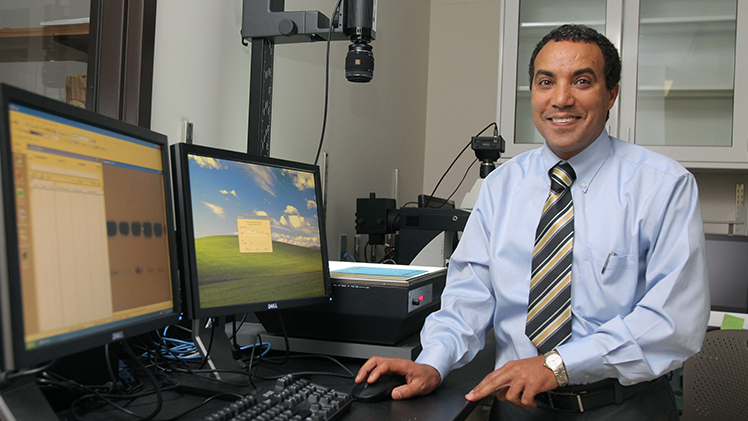 Dr. Youssef Sari’s research has contributed significantly to the field of drugs of abuse, including alcohol, cocaine, methamphetamine and nicotine.

“My excitement was overwhelming,” he said. “I called my wife first to let her know about this news and then my two boys. I also called my brothers to inform them about this good news and after that my colleagues and friends.”

Sari’s next step was preparing for his next four months living overseas beginning Sept. 1. King Saud University, the host institution for his Fulbright U.S. Scholar Award, is in Saudi Arabia.

King Saud University is one of the top universities in the Middle East, with most of its faculty members trained outside Saudi Arabia, particularly in the United States, Sari said.

Since he joined UToledo in 2010, Sari has published nearly 100 peer-reviewed articles and his research has contributed significantly to the field of drugs of abuse, including alcohol, cocaine, methamphetamine and nicotine. Sari’s research involves investigating potential therapeutic drugs for the treatment of drugs of abuse such as the synthetic opioid fentanyl.

“I have identified target drugs that are considered to reverse the effects of overdose of fentanyl in animals,” Sari said. “I will be also using different technologies such as proteomics, metabolomics and ionomics to identify biomarkers involved in fentanyl overdose. I will explore changes in the brain, blood and liver that might be caused with exposure to fentanyl.

“This area of opioid overdose is new, and the project proposed in the Fulbright Scholarship will be a good starting point to develop this research area that is currently less understood. The findings will help the host Institution, King Saud University, and The University of Toledo as these findings will be critical to prepare and submit grants to the National Institutes of Health to compete for external funding to further investigate the effects of opioid overdose and identification of target medications to attenuate these effects.”

Dr. George V. Rebec, a chancellor professor at Indiana University, who was Sari’s postdoctoral mentor and had a tremendous impact on his burgeoning career, praised Sari in a letter of support for the research scholarship award.

“In my 40-plus years at Indiana University, I’ve not known anyone who works harder and is more focused on drug and alcohol research, including mechanisms of neurotoxicity, than Youssef,” Rebec wrote. “He also proved to be an effective educator both in the classroom and in one-on-one mentoring in the laboratory. Simply put, he is an outstanding candidate.”

Sari said UToledo and King Saud played key roles in his receiving a Fulbright U.S. Scholar Award and that both universities will benefit from his research.

“Since my arrival here at King Saud University, faculty members have been very excited about the opportunity to collaborate with me on different projects, including the one proposed in the Fulbright program,” Sari said. “So far, I have established collaboration with four faculty members. In fact, I will be working with one of them to explore target medication to manage pain sensation in an animal model.”

As part of the program, Sari also will teach pharmacy students at King Saud University the pharmacology of medications that are involved in psychiatry and neurology.

“And I am also building networks to make connections between UToledo and KSU at the academic and administrative levels,” Sari said. “I am trying to build an exchange program between the institutions.”