Maj. Colby Pepon, professor and chair of The University of Toledo Military Science and Leadership Department, has been promoted by the U.S. Army to lieutenant colonel.

Pepon received a bachelor of science degree in exercise and sport studies from Tarleton State University in Stephenville, Texas. He also has a master of arts degree from the University of Oklahoma. 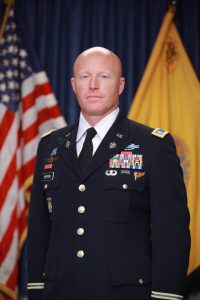 He was commissioned by the Reserve Officer Training Corp at Tarleton State University in 2003.

Pepon joined the UToledo faculty in July 2019 as professor and chair of military science and leadership. He oversees the Rocket Battalion’s effort to enroll, select, educate and inspire cadets in order to become future second lieutenants of the highest character, commitment and competence.

He also instructs Military Science and Leadership Level Four Cadets throughout their transition from Cadet to Army Officer and works directly with UToledo’s University College, campus partners and ROTC program.

“It is truly a privilege to serve as the head of the ROTC program here at UToledo, professionally and personally,” Pepon said. “The Army places great pride in its ability to develop leaders of all ages, race and ethnicities. I’m fortunate to be in a position where I can have an impact on the lives of the next generation of Army Officers.”

Pepon will remain at UToledo for the next two years.

“My promotion to Lieutenant Colonel first and foremost, is a credit to my family and their unwavering strength and support,” he said. “On the professional side, I’m indebted to the multiple leaders of all ranks that have provided their mentorship and time. Their counsel has enabled me to accomplish a long-term career goal.”