Twelve years after an oil spill coated nearly 35 miles of the Kalamazoo River, new research at The University of Toledo confirms that turtles rehabilitated in the aftermath of the disaster had high long-term survival rates.

Turtles were the most commonly captured oiled animals following a ruptured Enbridge pipeline near Marshall, Mich., in July 2010 that spilled 843,000 gallons of oil into a tributary creek of the river, one of the largest inland oil spills in U.S. history. 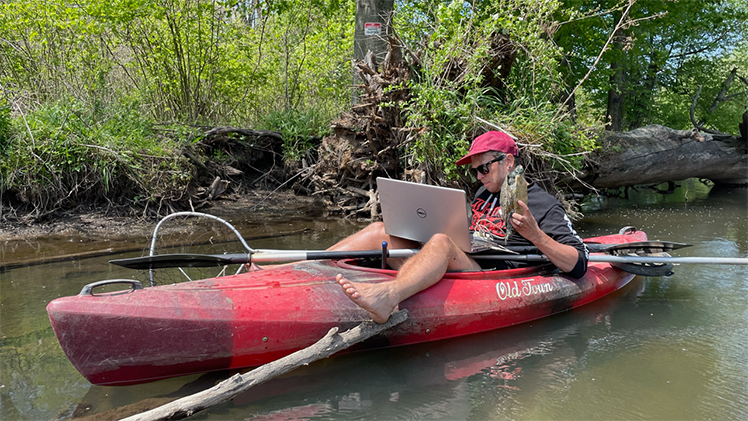 Dr. Josh Otten, who graduated in May from UToledo with a Ph.D. in biology, holds a turtle while downloading data to his computer on the Kalamazoo River. Otten is lead author of a new study that confirmed turtles rehabilitated in the aftermath of an oil spill disaster 12 years ago on the river had high long-term survival rates.

One of the first environmental responders on the scene was biologist Dr. Josh Otten, lead author of the new study published in the journal Environmental Pollution who graduated in May from UToledo with a Ph.D. in biology.

Otten helped lead efforts to rescue, rehabilitate and release thousands of affected turtles in 2010 and 2011, returning eight to 11 years after the oil spill to assess the status of the turtle population as a doctoral student in the laboratory of Dr. Jeanine Refsnider, associate professor in the UToledo Department of Environmental Sciences.

He found the rehabilitation process significantly increased the monthly survival probability of northern map turtles in the 14 months following the spill, showing the importance and effectiveness of removing oil from turtles.

And the success is maintained in the long term. Up to 11 years post-spill, the differences in monthly survival probability from turtles impacted by the spill and those that were not had become nearly imperceptible.

“The time, effort and money spent in the rehabilitation process of turtles is important in increasing their survival following a large oil spill disaster,” Otten said. “The Kalamazoo River northern map turtle population appears to be healthy and stable 8 to 11 years after the oil spill.”

He said a large number of adults, juveniles and hatchlings were captured and recaptured between 2018 and 2021, suggesting population growth. In addition, monthly survival rates during this time period are high.

“Rescuing and rehabilitating individual animals is a relatively common practice following an environmental disaster such as an oil spill. It often is a way for volunteers and other local people to feel like they are helping to fix the problem,” Refsnider said. “However, animal rehabilitation efforts can be incredibly expensive and labor-intensive, and very few studies assess whether they are actually successful at increasing survival rates of rehabilitated individuals. This is one of the few studies that directly measured both short-term and long-term survival rates of animals after undergoing cleaning and rehabilitation due to a major oil spill.” 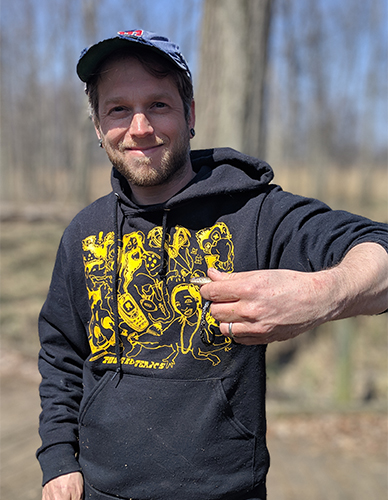 Otten’s Ph.D. research involved extensive recapture, radio-telemetry and nest-monitoring efforts to understand how the turtle population is doing today and to identify individual turtles that had been rescued and rehabilitated during oil spill cleanup operations in 2010.

“The scale of Josh’s study is really unprecedented — he handled several thousand turtles on nearly 50 kilometers of river over the course of this study and amassed a huge dataset of capture histories and locations for turtles over a 10-year period,” Refsnider said.

Funded by the U.S. Fish and Wildlife Service, the turtle population study focused on northern map turtles and estimated monthly survival rates of turtles exposed to the freshwater spill up to 14 months post-spill and then again for 8-11 years after the environmental disaster.

In 2010 and 2011, 2,100 northern map turtles impacted by the spill were captured, cleaned, rehabilitated, marked and released into the Kalamazoo River.

Of those, 63% were captured only once.

“Northern map turtles can be difficult to capture to begin with, so the chance that I would recapture them is quite low,” Otten said. “There are also other things like natural mortality, translocation and emigration that you take into account. I would guarantee there is a fair number more out there that eluded capture in the four years I was surveying. In terms of long-term turtle survey projects and detectability, the recapture rates are quite impressive.”

Northern map turtles, which may live up to 60 years, can survive for months after having been oiled, unlike mammals and birds that typically perish after a few weeks.

The study found turtles that died during the rehabilitation process while under care of veterinarians did so on average nearly 60 days after capture, revealing there may be a delayed response in turtles following an oil spill.

“This shows the importance of continued wildlife rescue following a spill, especially in the event that it involves turtles,” Otten said.

“There are so many unknowns regarding how the oil impacted the environment as a whole,” Otten said. “We do not know if there may have been a change in food resources, whether oil pooling in turtles’ hibernation locations impacted their survival during the winter, or even how cleanup efforts including boat traffic and erosion may have impacted turtles. Because of these variables, it is important to conduct a study like this, years after a disaster, to identify trends and help inform researchers, cleanup crews and agencies on how best to spend time and resources.”