In the world of college football players, University of Toledo defensive tackle Judge Culpepper stands out. And not just because of his unusual first name.

Culpepper graduated last May with a degree in history, not a typical major for student-athletes, many of whom might regard “history” as last week’s SportsCenter highlights. As if that weren’t enough, his field of study in the UToledo Graduate School is philosophy. 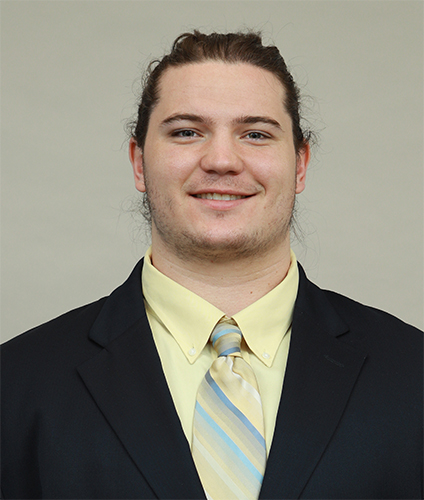 “I’m pretty excited about the philosophy program. Who doesn’t like that, right?” Culpepper said with a laugh.

So while Culpepper may have a niche for Nietzsche, the German philosopher is not necessarily a regular topic of conversation in the Rockets’ locker room.

“The main person I have philosophical discussions with is my roommate, Tucker Gleason, but only in a broader sense,” said Culpepper, who transferred to Toledo in 2021 after three seasons at Penn State. “Coach (Robert) Wiener was an English teacher for 30 years, so he is also a good person to talk with about subjects like that. But for the most part, we all talk about other things.”

Judge credits his academic pursuits, in part, to the inspiration of his family, all of whom have followed their own unique life paths. His father, Brad Culpepper, is a lawyer who played college football at the University of Florida and spent nine years as a defensive lineman in the NFL. Brad earned his master’s degree and law degree from Florida as a part-time student during the off-seasons of his professional playing career.

“My dad was a history major and so I have always been fascinated by the past, always been a history guy,” said Culpepper. “My dad is a lawyer now. It’s something I would like to do in the future, follow in his footsteps.”

Judge’s mother, Monica, also is a Florida grad and was a homecoming queen. She was a physical therapist before challenging herself with two appearances on the reality TV show “Survivor,” taking second place in the “Blood and Water” season in 2013 (Brad also appeared on the show with Monica that season, and later earned “Survivor” runner-up honors himself in 2017).

Judge’s older brother, Rex, a quarterback at Syracuse from 2017-20, is a cancer survivor who currently attends law school at Stetson University in Florida. His younger sister, Honor, plays basketball at New York University, where she majors in media, culture and communications and interned with CNN last summer.

Judge said his connection to the legal profession extends beyond his immediate family. His ancestry includes a line of lawyers going all the way back to the early part of the 20th century. That portion of his family’s story also partly explains Judge’s unique first name.

“Besides my dad, my grandpa, Phillip Culpepper, was a lawyer. My uncle Bruce is a lawyer,” said Culpepper. “My great grandfather, John Brower Culpepper, was a judge in Florida. Everyone knew him as ‘Judge Culpepper.’ That’s where I got my name.” Culpepper jokes that maybe someday he could get his own courtroom TV show and call himself “Judge Judge.”

Brad Culpepper said that despite the family lineage, he has never tried to convince any of his children to pursue legal careers. 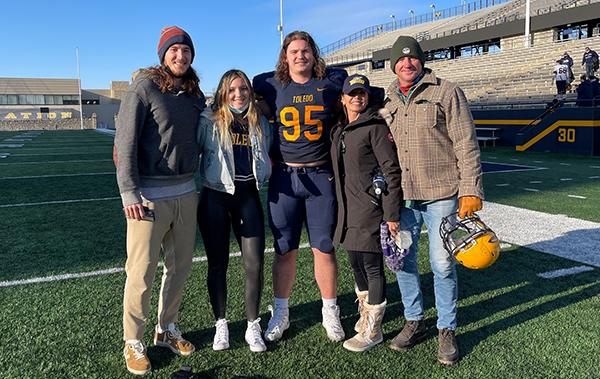 University of Toledo defensive tackle Judge Culpepper, center, credits his academic pursuits, in part, to the inspiration of his family, all of whom have followed their own unique life paths. His father, Brad Culpepper, is a lawyer who played college football at the University of Florida and spent nine years as a defensive lineman in the NFL.

“I like the fact that all of our kids have branched out and done their own thing,” Brad Culpepper said. “I played football at the University of Florida, but Rex went to Syracuse, Judge went to Penn State and Toledo, and Honor is at NYU. They could have stayed in Florida if they wanted to. I would be happy if they want to be lawyers, but I never tried to push them in any direction. I never pushed them to play baseball or football or basketball or do anything they didn’t want to do. I’d be happy if they became a movie producer or anything they wanted. As long as they are happy, they can do whatever they want to do.”

While a legal career (and possibly a shot in the NFL) may await in Culpepper’s future, for now, he is focused on graduate school and helping the Rockets reach their goal of a Mid-American Conference title. He has been a steady force at defensive tackle for the Rockets, starting in every game he has played in the Midnight Blue and Gold.

Head Coach Jason Candle said Judge fit in with the Rockets from the moment he arrived on campus.

“When guys transfer to your program, you’re always looking for flaws, for reasons why they left the place they were at,” said Candle. “But from a character standpoint and an attention-to-detail standpoint, Judge has shown that he’s very serious-minded about his business. He’s a very smart young man who is a product of great parenting. He knows what he wants out of life and what success looks like. He’s not afraid of the work that is required for that to happen.

“Judge is a guy who is very comfortable in his own skin.”