Several new dining options, including a full-service Chick-Fil-A, the addition of a national sandwich chain and on-campus delivery, are in the works as part of Rocket Dining’s ongoing effort to improve on-campus dining at The University of Toledo.

To make way for the expanded Chick-Fil-A, the Steak ‘n Shake location in the Thompson Student Union will permanently close Friday, Oct. 2. The existing Chick-Fil-A Express will continue operating until the full-service location, which will feature an expanded menu and community seating, opens early in the spring semester. 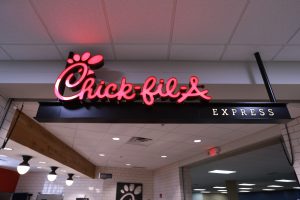 A new burger joint called True Burger will take the place of the current Chick-Fil-A location later in the spring semester, offering burgers, fries and milkshakes.

Other changes set to debut during the spring semester include the addition of a an Erbert and Gerbert’s sub shop at The Market at Ottawa East, an expansion of Starbucks in the Carlson Library to include more seating with a coffee house atmosphere and two new restaurants in the Student Union food court. Pom & Honey will offer fresh, customizable salads, grain bowls and wraps. Tu Taco is built around the idea of a street taco cantina, featuring simple soft tacos with Tex-Mex and Cali influences.

Additionally, Rocket Dining is planning to join a pilot program for an on-campus delivery service later this fall. The service, called Boost Delivery, is an extension of the current mobile pickup ordering service, Boost Mobile Ordering.