At The University of Toledo, Jorden McKenna plays a critical role in the Great Lakes comeback of a species that swam with the dinosaurs: giant, ancient sturgeon.

The graduate student earning her master’s degree in biology in the Department of Environmental Sciences is helping track newly released juvenile lake sturgeon in Lake Erie fitted with acoustic telemetry tags that report the fish’s position. 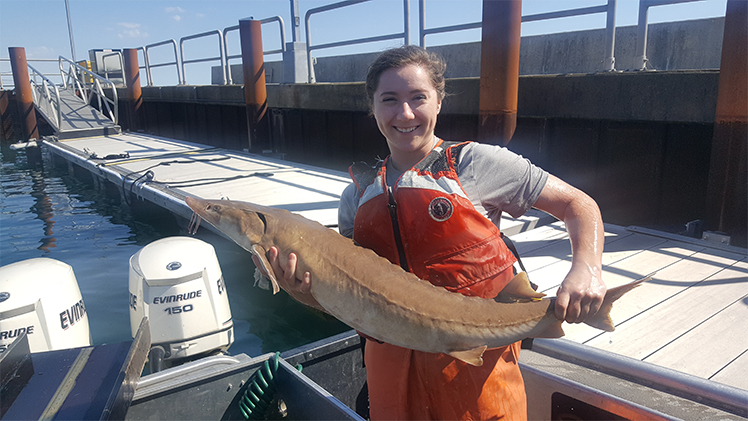 “What makes sturgeon pretty fascinating is the fact that they are a prehistoric species,” said McKenna, who is from Pittsburgh and earned her bachelor’s degree at Kent State University. “I get to study and work on the dinosaur of the Great Lakes.”

She’s gearing up for a big weekend. The community is invited to the Toledo Zoo’s third sturgeon release since 2018 into the Maumee River from 10 a.m. to 2 p.m. Saturday, Oct. 2. The event is free. Attendees can release one baby sturgeon per person as well as sponsor a fish.

“The idea that I get to be a part of reintroducing sturgeon to the Maumee River and hopefully help them reestablish a natural spawning population is extremely exciting to me,” McKenna said. “They are a very important and iconic species in the Great Lakes, and it would be amazing to see their population numbers increase in my lifetime.”

“Recovering lake sturgeon populations is critically important because lake sturgeon are an indicator of ecosystem health,” said Dr. Bill Hintz, assistant professor of ecology and McKenna’s faculty advisor. “If lake sturgeon are doing well, that might indicate that there is sufficient habitat and water quality is good.”

Lake sturgeon were abundant in the Maumee River in the 1800s, but the demand for caviar and fuel, as well as commercial over-fishing, caused the population to decline and ultimately disappear. 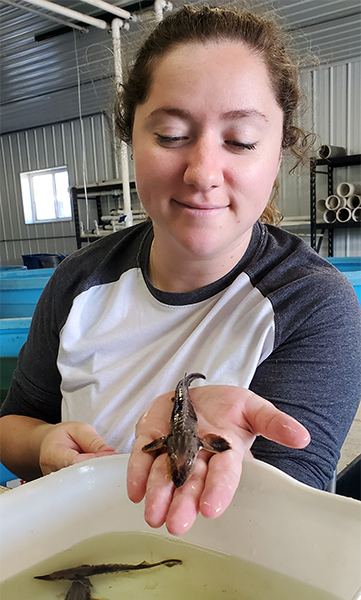 Dr. Jessica Collier, who at the time was a doctoral student researcher in the Department of Environmental Sciences, assisted the project by verifying that spawning and nursery habitat still exists in the Maumee River to sustain a population of the fish.

Collier is now a fish biologist for the U.S. Fish and Wildlife Service.

“I’m thrilled this research is continuing and investigating where and how the young sturgeon are moving throughout the Maumee River and using different habitats,” Collier said. “The initial work to develop habitat suitability models to support lake sturgeon reintroduction was just the beginning, and using acoustic telemetry to identify habitat use by young sturgeon will help us better understand our predictive habitat models. Looking to the future, this work will be essential to help us assess other Lake Erie rivers for lake sturgeon reintroduction and help us adaptively manage habitat assessments for these amazing fish.”

Since the sturgeon rearing facility was built, thousands of the fish have been released into the Maumee River when they’re six months old and about seven inches long.

“In both 2018 and 2019, a few fish were fitted with acoustic transmitters,” McKenna said. “Lake Erie has an array of acoustic receivers which are part of the Great Lakes Acoustic Telemetry Observation System that picks up detections when a ‘tagged’ fish swims near a receiver.”

Each detection records a timestamp, creating a timeline of detections. This allows McKenna to see where the fish go after they are released.

From the UToledo Lake Erie Center, McKenna conducts her research, which she describes as putting a puzzle of data together.

“The data collected from the receiver network are complex,” McKenna said. “I am using a variety of statistical techniques to piece together survival rates, movement patterns and habitat use of the sturgeon.”

“Successful reintroduction relies on understanding juvenile populations, but little is known about juvenile survival, movement patterns and habitat selection post-spawning,” McKenna said. “The purpose of my project is aiming to close this knowledge gap and piece together a complex puzzle, which will help to inform restoration and conservation management strategies, allowing managers to make adjustments to promote the recovery of lake sturgeon in the Maumee River and elsewhere.”

McKenna credits her faculty advisor and committee members with playing a large role in her research success.

“The resources that are offered at UToledo and the network of people available to support myself and other students is vast,” McKenna said. “Dr. Hintz is an incredibly supportive advisor who offers great insights. I’m sure his continuing advice and encouragement will help me succeed here at UToledo and beyond.”

Before choosing to pursue her master’s degree at UToledo, McKenna worked as a contract fisheries research technician at the U.S. Geological Survey’s Lake Erie Biological Station in Sandusky, Ohio, and as a biological science technician for the U.S. Fish and Wildlife Service in Trenton, Mich.

“We were lucky that Jorden accepted the position to earn her master’s degree investigating lake sturgeon survival, movement and habitat use,” Hintz said. “Jorden’s prior experience with state and federal agencies provided her with a great foundation for lake sturgeon conservation. Even more so, it was Jorden’s motivation and work ethic that made her well suited to take on the responsibility of understanding important aspects of lake sturgeon recovery.

“I know that after Jorden graduates from UToledo, she will continue to do great things that facilitate the conservation of our natural resources in the Great Lakes Region.”