Searching for new ways to address the growing threat to drinking water in northwest Ohio and across the globe, Dr. Jason Huntley discovered that native freshwater bacteria can destroy toxins produced during harmful algal blooms.

The University of Toledo scientist has now received a $1.1 million grant from the National Oceanic and Atmospheric Administration to advance that research into real-world solutions.

Huntley, an associate professor in the UToledo Department of Medical Microbiology and Immunology, has already shown in lab experiments that biofilters using those Lake Erie bacteria can remove microcystin at levels exponentially above current exposure guidelines established by the World Health Organization.

“This grant will enable us to extend our research to the next level,” Huntley said. “We did this successfully in the lab. Now we want to scale it up and put the bacteria to work in the water treatment plant.”

The three-year research project will take a multifaceted approach to translate Huntley’s earlier finding into technologies that safeguard the drinking water of hundreds of thousands of people. 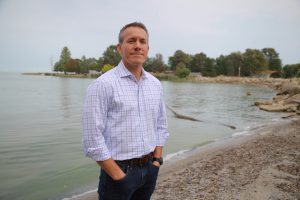 “One of our big pushes here at UToledo is to not just do science for science’s sake, but to ask questions about how it can improve human health,” Huntley said. “This isn’t just a Toledo problem. There are harmful algal blooms all across the country and all across the world. This is a solution to a global health problem.”

Water treatment plants primarily use activated carbon to capture the microcystin toxins released during some harmful algal blooms. While effective, there are drawbacks. It can be expensive, there’s a limit to how much toxin can be removed from the water and the process generates microcystin-laden waste products that have to be dealt with.

Huntley and his research team believe their bacteria could help address those issues. Biofilters could be used to treat drinking water before it reaches the tap, and the bacteria could be added to the treatment plant byproducts to degrade the lingering toxins.

“It’s not free, but it’s really cheap to grow these bacteria that chew up and degrade the toxins. We grow them in water, that’s it. We think we can use them to treat water coming into the treatment plant as well as eliminating toxins in the water treatment byproducts, eliminating the need to incinerate these waste products or send them to a landfill,” Huntley said.

Prior to large-scale testing at the Toledo wastewater treatment plant, researchers will work to further develop and test the biofilters in a range of conditions, such as different water pressures and temperatures.

The research team also will work to isolate and identify the bacterial enzymes that break down microcystin, with a goal of being able to produce them on an industrial scale. Some of that work will be done in collaboration with the Lawrence Livermore National Laboratory — a connection that was made during 2019’s National Lab Day at UToledo. The long-term goal is to develop water treatment tablets or droplet bottles that could be used to quickly detoxify water while boating, at family cabins or while hiking.

Huntley’s early work on this issue was funded by the Ohio Department of Higher Education’s Harmful Algal Bloom Research Initiative and the Ohio Sea Grant. The success of that research helped UToledo earn the NOAA grant.

“This is turning taxpayer money here in Ohio to federally funded grants that bring big money back to Ohio,” Huntley said.