In each class of medical students, Dr. Amira Gohara sees eagerness, brilliance and immense potential that puts the world at their fingertips.

But she also sees something else — vulnerability. 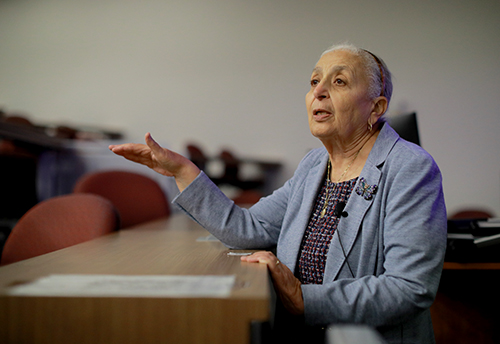 Dr. Amira Gohara , professor and chair of the Department of Pathology, has been an essential part of the fabric of the College of Medicine and Life Sciences for more than 50 years.

“They are on a path to make a difference for many people, but medical school is extremely challenging,” she said. “The students are worried — are they going to match? Are they going to pass their licensure exam? They want support, they want love. If they are struggling, I am there for them. I offer them opportunities and work with them to make that passage a little easier. I give them hope, and with hope comes hard work.”

For more than five decades Gohara, professor and chair of the Department of Pathology, has been an essential part of the fabric of The University of Toledo College of Medicine and Life Sciences.

As a resident, educator, administrator and gentle but fierce advocate for learners, Gohara has left her impression on thousands of medical students, trainees and fellow faculty members over the past 51 years.

“I think what stands out to me more than anything is that she taught me how to be a physician, and what was important in being a physician,” said Dr. Andrew Casabianca, an associate professor of anesthesiology and a 1988 graduate of the then-Medical College of Ohio. “What I learned from her is transferrable to just about everything I’ve done as a physician.

“There’s an innate kindness to her that I try to model every day. It’s helped me get to where I’ve been in this institution.”

Last weekend Gohara’s contributions were recognized with a lifetime achievement award from the College of American Pathologists, one of the highest honors in the field.

The award, presented during the organization’s annual meeting in New Orleans, recognizes individuals who have made a broad and positive impact on pathology over many years of work.

Gohara, the group noted in its award announcement, has “dedicated her entire career to her profession, its image, quality, patient and community service, and teaching. [She] is loved by students, residents, faculty, and administration alike.”

Despite her long and storied career in medicine and medical education, Gohara, 81, had dreams of being a chemist or pharmacist while growing up in Egypt. 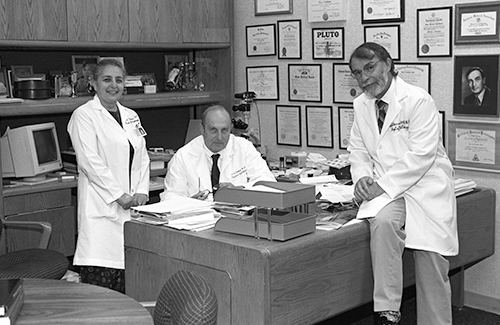 Gohara in 1993 with Dr. Peter Goldblatt, center, chair of the Department of Pathology at the time, and Dr. Philip Conran, right, then director of undergraduate medical education for pathology.

Though her father died when she was 10, her mother worked to ensure she had every opportunity to succeed, including sending her to top private schools.

“Her goal in life was that this kid is going to get an education, no matter what. Nothing was going to deter her from getting me my education,” Gohara said.

High school test scores put her in the position to study nearly anything she wished, but a career in pharmacy would have required her to leave her hometown of Cairo for Alexandra. Cultural mores as they were, her mother balked at the idea of a young, single girl going to live in another city.

Instead, Gohara enrolled with her best friend in medical school. She was accepted and flourished.

After graduating with her medical degree and completing national service as a rural physician, she did a pathology residency in Egypt, then another in England.

She arrived in Toledo on Dec. 29, 1969, to begin a third residency at the Medical College of Ohio along with her husband, Dr. Sabry Gohara, who also was beginning a residency placement.

After completing her residency, she took a part-time job with the medical school while also working as a pathologist at Henry County Hospital before returning to the Medical College of Ohio full time in the late 1970s.

In the years since, she’s served as assistant dean of students, executive associate dean for faculty affairs, provost, and dean of the college. She also served for 18 months as interim president of MCO in the early 2000s.

As a clinical pathologist, Gohara has played an integral role in UTMC’s renal transplant program running the HLA lab, which helps to ensure compatibility between the donor organ and recipient. She also currently serves as director of UTMC’s clinical chemistry, immunology and flow cytometry laboratories.

It was teaching, though, that connected most to her heart, and no matter the position she held, she was happiest in the classroom.

Her educational work has been recognized with several awards, including an outstanding teacher award from UToledo and the UToledo Alumni Association in 2012 and multiple Robert T. Tidrick Golden Apple Awards from the College of Medicine and Life Sciences.

“She honestly is a really good teacher and was such a consistent presence in our lives,” said Dr. Kara Richardson, a 2019 medical school graduate who is currently an OB-GYN resident with the College of Medicine and Life Sciences. “Her personality and warm demeanor, I feel like everyone connected to it. A lot of my friends went to her for career advice and life advice. She was just there for everyone.” 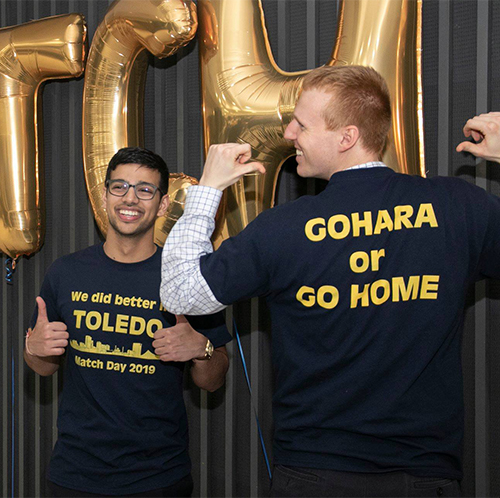 From left, Dr. Archit Sahai and Dr. Kevin Stephenoff, who earned their medical degrees from UToledo in 2019, pose with their “Gohara or Go Home” T-shirts on Match Day.

Ahead of Match Day in 2019 — when fourth-year medical students learn where they’ll embark on their residency training — Richardson reached out to Gohara with a request.

Could they print T-shirts with her name on it? They were thinking ‘Gohara or Go Home,’ a cheeky nod to just how beloved their professor was.

The answer was, of course, an enthusiastic yes.

“She’s definitely a staple of the school,” Richardson said. “Every time she walks in everyone wants to be happy immediately. She just brightens everyone’s day.”

Today, a framed shirt signed by Richardson and many other members of that graduating class hangs in her office.

“That was very touching and overwhelming for me because I didn’t feel like I deserve all that acknowledgment,” Gohara said.

She feels similarly about the lifetime achievement award. Honored, but not sure she’s deserving.

When a friend let her know that he had nominated her, Gohara saw it as a nice gesture, not something that was likely to go anywhere. The award notice came as a surprise, and she demurs that others are more deserving.

What she’s most proud of — her own lifetime achievement — is being there for her students.

Upon taking over as dean of the college in 1996, one of her daughters asked how she hoped her tenure would be remembered.

“I said I want to be remembered as an educator because that’s I feel my mission. If I can make a little difference for any young person, or for any patient because of what I shared with my students, that will be the thing that I feel people should remember me for,” she said. “That’s the achievement I love the most. When I see them, my heart is happy, and when I hear about their successes it makes me proud like a mom or a grandma.”

Dr. Christopher Cooper, dean of the College of Medicine and Life Sciences and executive vice president for clinical affairs, said Gohara serves as an inspiration to students and sets an aspirational example for junior and mid-career faculty members.

“She’s so dedicated to our learners and the college, and she always does things the right way,” he said.

Cooper often jokes that he wants to be Dr. Gohara when he grows up, something she’s heard him say many times.

“What I mean by that is she’s been a longstanding faculty member who has had a diversity of administrative roles while remaining heavily engaged in student education and clinical practice,” he said. “It’s a very genuine interest in making sure our students have the best possible opportunities, and she does that while also being an accomplished physician. We should all be so fortunate to have a career like she does.”