She was chosen to help NASA’s hunt for an answer to one of the great mysteries of the universe: Is there or has there even been life on Mars?

“It’s so cool to be able to tell my family I’m working on a Mars project with NASA,” King said. “It’s surreal. When my art professor first told me I would be one of two students selected to build a 3D model spacecraft that’ll be used for intense testing, I was like, ‘Me? Are you sure?’ I never fully grasped how impressive our University is until this moment.” 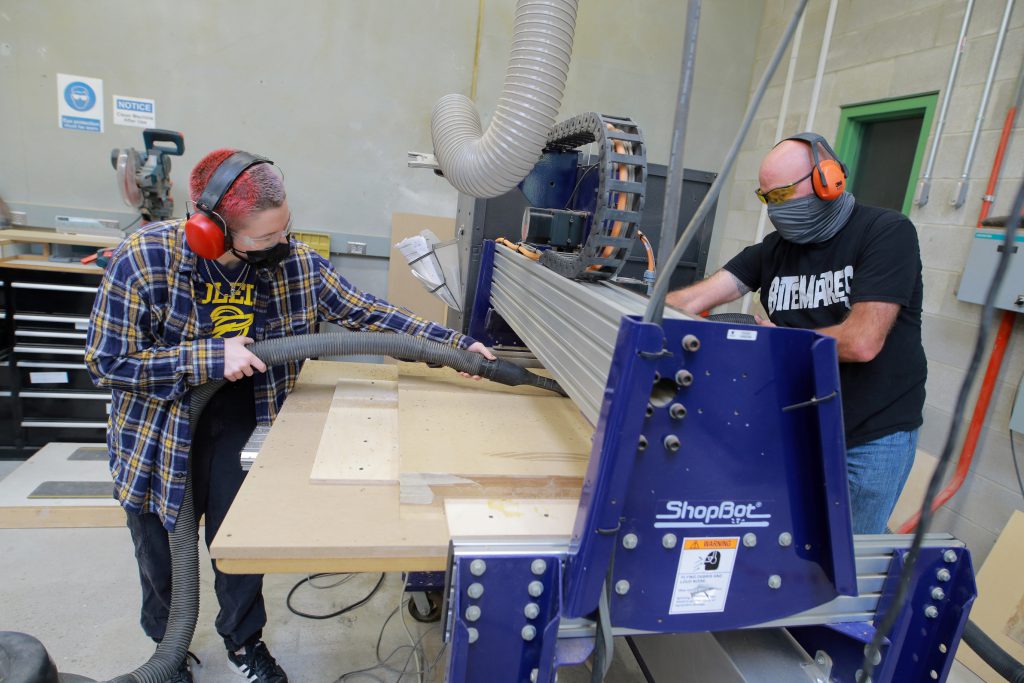 Anastasia King, left, a visual arts sophomore, and Joseph Boorom, a 3D art senior, vacuum sawdust from a buzzing computer-controlled cutting machine as part of a project with NASA to create a life-size prototype of the capsule that would carry soil samples from Mars back to Earth.

King and 3D art senior Joseph Boorom are creating a life-size prototype of the capsule blanketed by a unique heat shield that would carry soil samples from Mars back to Earth that could hold potential evidence of life on Mars that the Perseverance Rover roaming the surface of the Red Planet has already begun to collect.

They’re making a mock-up of what is known as the Earth Entry System, which will protect the samples from being destroyed by the heat of entry into the Earth’s atmosphere all the way to the surface.

It will be a part of the Capture, Containment and Return System constructed by NASA and part of the Earth Return Orbiter, which is scheduled to be built in the next three years by the European Space Agency and launch in 2026.

UToledo’s portion of the project is a collaboration with NASA Goddard Space Flight Center and scientists at the University of Arizona to ensure there is less than a 1 in a million chance of the reentry spacecraft’s heat shield being destroyed and releasing those Mars soil samples onto Earth, which could be potentially hazardous if the samples contain living organisms.

Apollo astronauts were quarantined after returning from the moon for a similar concern in 1969 and beyond.

The UToledo team is fabricating a complete fiberglass cell of the heat-sealed spacecraft that is about 4 feet wide and 1.5 feet high called the thermal protection system.

UToledo’s work will help scientists in Arizona, Maryland and California design an effective camera and illumination system inside the capsule that can recognize if the heat shield was penetrated.

“Our 3D model needs to be identical to the spacecraft’s size and lightweight because NASA and the researchers at the University of Arizona are going to put it through the wringer to figure out problems and rule out issues because the real thing will endure temperatures of thousands of degrees and micrometeoroids on its journey to and from Mars,” said Brian Carpenter, assistant professor of 3D design and interdisciplinary art at UToledo.

Eric Zeigler, left, assistant professor of art, and Brian Carpenter, assistant professor of 3D design and interdisciplinary art, work on the mold of the “nose cone” as part of the project to create a mock-up of what is known as the Earth Entry System, which will protect the Mars soil samples from being destroyed by the heat of entry into the Earth’s atmosphere all the way to the surface.

“It doesn’t make sense to do those kinds of tests with the real materials. This 3D model is more cost effective, plus it gives our students incredible learning experience.”

The students along with Ian Rummell, a technical assistant at the UToledo Center for Sculptural Studies on the Toledo Museum of Art campus, are currently building the molds they’ll use to make the model.

They have completed the mold of the “nose cone” for the top and are now using the computer-controlled cutting machine known as a CNC router to build side panels. The machine doesn’t create material like a 3D printer, but removes material, in this case medium-density fibreboard, an engineered wood that’s more dense than plywood.

Once the mold is done, they’ll use it to craft the fiberglass model and then replicate the woven carbon fabric heat shield to coat the surface.

The team expects to complete its prototype in November.

“This is an out-of-body experience,” said Eric Zeigler, assistant professor of art. “It’s amazing because we had no idea we’d be able to work on a NASA project as artists.”

“How we became involved in the Mars project was serendipity,” Carpenter said.

The connection came from a fellow faculty member in the Department of Art — Dr. Mysoon Rizk, professor of art history and modern and contemporary art.

“Mysoon’s brother was in town, and she asked us to give him a tour of the Center for Sculptural Studies,” Carpenter said.

Her brother is Dr. Bashar Rizk, research scientist and senior staff scientist at the University of Arizona’s Lunar and Planetary Laboratory.

The 7,000-square-foot UToledo Center for Sculptural Studies, a building designed by world-renowned architect Frank Gehry, houses four main studio classrooms — ceramics, woodshop, sculpture and foundry. The facility is located next to UToledo’s Center for the Visual Arts, a building also designed by Gehry and attached to the Toledo Museum of Art.

“A week and a half after we went through our facility showcasing our 3D studies program, he called and asked if we’d make a life-size model to scale that he can use to test and troubleshoot,” Carpenter said.

Rizk, a camera scientist who has been working on NASA projects for more than 30 years, says this is the first time he has enlisted the help of art students on a mission.

“Nobody could figure out how to protect the heat shield just by armoring it better than a one in 10,000 chance of the reentry capsule being destroyed, and we need to reach less than a 1 in a million chance,” Rizk said. “So NASA decided to install a series of inspection cameras that would observe the heat shield to determine if it experienced a critical impact so severe that reentry to Earth needs to be canceled. That’s where I come in.”

His team is in the process of designing the camera and illumination systems.

“To test them and how well they work together, it’s better to have a mockup,” Rizk said.

The heat shield material that Rizk needs UToledo art students and faculty to replicate is not like the normal ones NASA has used on other entry vehicles. Known as HEEET, it’s a new style of protective material being developed at NASA’s Ames Research Center.

“It’s designed to withstand tremendous temperatures and does this partly by being made of carbon and the arrangement of the fibers in it which have minimal contact with each other,” Rizk said.

He is confident the students and faculty in UToledo’s 3D art program can use their creativity, skills, equipment and flexibility to reproduce the heat shield for the entry capsule.

“To get the surface of the heat shield right, you have to have ideas,” Rizk said. “I’ve known about the department for decades with my sister working at The University of Toledo, and I’ve also known Brian Carpenter for years. I am blown away by what they do. Their whole approach is extremely professional.

“People in that art department are used to working with different types of materials and prepare for it. Modern sculptures are complicated and challenging. Artists are a good combination of detail-oriented and wide-ranging in their vision. And that was an important selling point for me. When I toured the facility, I saw they were used to building big things. And we are psyched about working with students.”

King, wearing glasses to shield her eyes from the dust, says building this prototype to help NASA figure out problems has great potential to change what we know about outer space and the course of her life.

“Maybe this will open some doors for me,” King said. “An art career can be connected to astronomy. There are so many possibilities.”