When she was growing up, Stephanie Sherman always wanted to become a veterinarian. That is, until a visit from a University of Toledo recruiter changed the course of her career path.

Sherman, a senior on the Rockets’ women’s track and cross country teams, was a junior at Notre Dame Academy in Toledo when a recruiter from the UToledo College of Engineering spoke to her class about the different fields of study in engineering. It was a transformative moment for an impressionable high school student.

“The recruiter made engineering seem so fascinating,” said Sherman, now a bioengineering major at UToledo who expects to graduate next spring. “He explained how engineering technology had advanced into so many areas, including into the worlds of medicine and even veterinary medicine. I was just amazed. I wanted to become a part of that.” 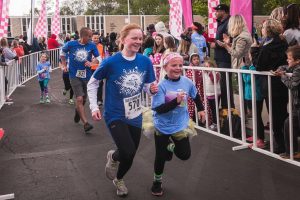 Stephanie Sherman finishes a 5K run with her grade-school partner as part of the Girls on the Run program.

Sherman was already being recruited by then-Rocket head track coach Linh Nguyen as a track athlete, so the combination of an athletic scholarship and a chance to study bioengineering made UToledo the perfect fit for her. She had no qualms about leaving her dreams of becoming a veterinarian behind.

“My desire to be a vet was more about my love for animals than anything else,” said Sherman, who grew up in Sylvania. “When I learned more about what engineers actually do, I decided that was a better career path for me. Engineers are integral to so many facets of our lives, including making lives better for animals. You are seeing amazing advances in prosthetic limbs for animals, for example. Bioengineering is a perfect major for me because I can still be involved in the medical field and make a difference as an engineer.”

There was a personal side to Sherman’s decision too. After her grandmother had unsuccessful double knee-replacement surgery that left her in considerable pain, Sherman was inspired to be part of a field that could make a difference in people’s lives.

“That clinched it,” she said. “I wanted to be a bioengineer to help prevent that from happening to anyone else.”

Sherman has not regretted her decision. She has had three summer co-op experiences that have reaffirmed her career choice. Her most recent experience with Ethicon Endo-Surgery in Cincinnati came as a result of her attendance at a Women in Engineering Leadership Conference in 2019. The circumstances that led her to that conference shed some light on her personal priorities, as well as the support she has received as a student-athlete.

“The conference was the same weekend as the MAC Indoor Track Championships, and I was scheduled to run in a relay event,” Sherman recalled. “I talked it over with Linh and explained how important a co-op was for graduation and my career field. He said, ‘School comes first,’ so I was able to go to the leadership conference.” 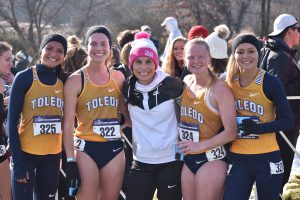 Based on interviews at that conference, Sherman was chosen for a co-op with Ethicon that year, and then was asked to come back again this past summer. She was told what stood out about her was her leadership skills, something she credits to being a student-athlete.

“Track has taught me that as a leader you have to speak up but at the same time you can’t be too aggressive with people,” she said. “You can’t just boss people around and tell them what to do. Nobody responds well to that.”

“Stephanie has been a joy to coach,” said McDonough, who is entering her second season as the Rockets’ director of cross country and women’s track & field. “She is a tremendous leader and role model to the young men and women of our program. She has demonstrated what the power of belief, hard work and a great attitude can do. Stephanie truly exemplifies what being a Rocket is all about and I look forward to watching her star continue to rise, as well as the impact she will continue to have on her community and those around her.”

Sherman’s leadership resume extends beyond the track. She is a vice president of UToledo’s Student-Athlete Advisory Committee ; vice president of Tau Beta Pi, the engineering honor society; vice president for community outreach for the UToledo Engineering Council; and has served on the Mid-American Conference’s Council of Student-Athletes. When time allows, she also is an enthusiastic participant in volunteer community outreach programs. Girls on the Run, a mentoring program that promotes running and athletic participation for elementary school girls, is especially near to her heart.

“I’m a runner. I love to run,” said Sherman, who ran her first race when she was just five years old but didn’t begin to take running seriously until the eighth grade. “I love to see these girls run because they love it, not because someone makes them do it.”

Sherman’s enthusiasm for her sport has fueled her efforts in a running career that was beginning to peak just before the COVID-19 pandemic came on the scene. At last February’s MAC Indoor Track & Field Championships, she captured fourth place in both the 5000 meters and 3000 meters in consecutive days, setting personal best times in both events. She credits Coach McDonough for giving her the confidence to succeed.

“Before the meet, Andrea told me that I could do it,” said Sherman. “I told her, no I can’t. So after the first race she said, ‘I told you could do it.’ She believed in me more than I believed in myself.”

Added Grove-McDonough, “Stephanie is a wonderful success story in so many ways and epitomizes what being a student-athlete is all about. What’s been really fun to see this past year is how she has really embraced all the changes that come with a new coaching staff and has transformed herself athletically into one of our top runners and top conference scorers — a feat she had never accomplished until this past winter.”

Sherman is graduating in May but has still not decided on her next step. She has two more years of athletic eligibility left in outdoor track so she could come back and work on her M.B.A. a year from now if the right job offer does not come along after graduation. No matter what happens, Sherman has definitely made the most of her time at UToledo.

“My experience at The University of Toledo has been nothing short of amazing,” said Sherman. “Having the opportunity to compete as a student-athlete and to receive such a great educational opportunity has been incredible. I truly don’t think I could have had this experience anywhere else.”