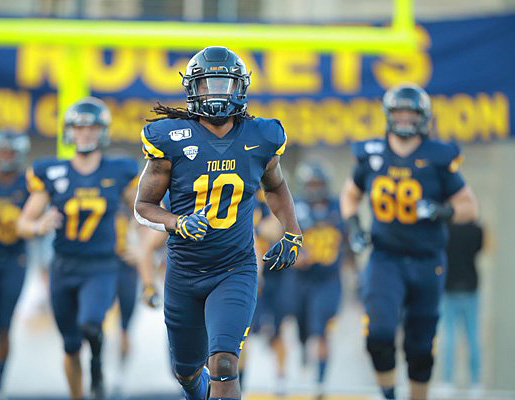 The Rockets will play their next three games in the Glass Bowl.

The Rockets will be looking to snap a two-game losing streak following road losses at Bowling Green and Ball State. Toledo fell behind early and could never catch up in a 52-14 loss to the Cardinals Oct. 19 in Muncie, Ind. The loss puts Toledo two games behind the Cardinals (4-3, 3-0 MAC) in the MAC West Division race.

Ball State led at halftime, 38-0, scoring 17 points in the first quarter and 21 in the second. The Rockets did not score until the third quarter when senior Ronnie Jones scored on a 44-yard touchdown run. Jones added another TD in the fourth quarter on a one-yard plunge into the end zone.

The Rockets were playing without senior quarterback Mitchell Guadagni, who was injured in the Oct. 12 game at Bowling Green. Redshirt freshman Carter Bradley started his first game as a collegian, throwing for 137 yards. Freshman DeQuan Finn also saw time, passing for 34 yards and rushing for 28 more.

Eastern Michigan is coming off a 34-27 home victory over Western Michigan last week. The Eagles scored the winning touchdown with 36 seconds left on a 34-yard pass from sophomore quarterback Preston Hutchinson to Mathew Sexton. Jeff Hubbard then intercepted WMU QB Jon Wassink to seal the Eagle victory. Hutchinson completed 31 of 36 passes for 357 yards off the bench for the injured Mike Glass. Glass leads the MAC in passing yards per game (268.3), while Hutchinson now leads the league in passing efficiency (183.3).