Freshman Joy Chirchir crossed the finish line first and led four Rockets among the top seven runners as The University of Toledo ran away with the 2021 MAC Women’s Cross Country Championship title at Eagle Crest Golf Course in Ypsilanti, Mich., on Saturday. 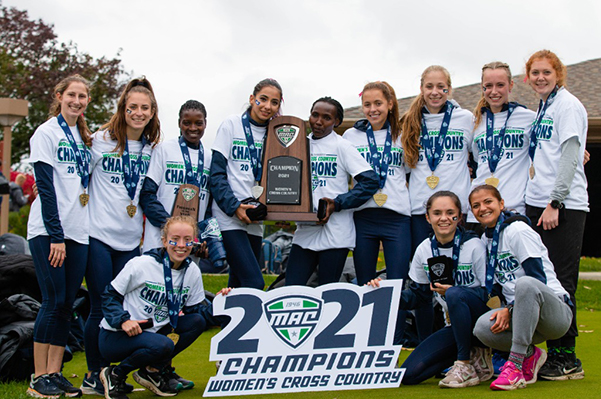 The University of Toledo ran away with the 2021 MAC Women’s Cross Country Championship title at Eagle Crest Golf Course in Ypsilanti, Mich., on Saturday.

Toledo’s score of 32 points was well ahead of second-place Miami (61 points) to capture its first league crown since 2014. Head Coach Andrea Grove-McDonough said the victory helped make up for her team’s narrow second-place finish in 2020.

“It’s a great feeling,” said Grove-McDonough, who was named the MAC Women’s Coach of the Year. “This time last year we were watching Northern Illinois celebrate. It was a tough loss. It’s been 364 days that I’ve been thinking about that so it’s fun being the team that gets it done. I knew if we executed our plan and took care of business that we could win.”

Chirchir, who was named MAC Freshman of the Year, led from almost the very start and was never seriously challenged.

“It was not my plan, but I was comfortable to be in front,” said Chirchir, from Eldoret, Kenya. “I was like, this is my race. I have to go get it.”

“Joy has been a star from the get-go,” said Grove-McDonough. “But what makes Joy special is she is a team player. For her, the team win means more to her than her individual win. She’s a great leader who works super hard. It’s just fun to see her shine like that.”

Chirchir, Karaslan, Linga and Trois all were named First-Team All-MAC.