Senior accounting major Rebecca Dangler has approached her entire college experience with a proven three-step process to accomplish just about anything on The University of Toledo campus:

Take marching band, for example. When she arrived on campus, she’d planned on participating in the band, just as she had in high school. But it turned out to be a learning experience — initially, at least.

“In high school, a lot of people don’t necessarily take it seriously. It’s just something you do after school,” she said. “In college, a lot of the people are either music majors or music minors, so you have a lot of really talented people.” 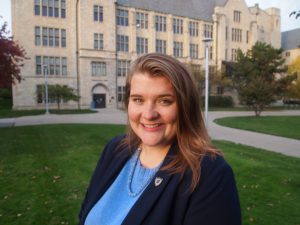 Facing tough competition, Dangler applied herself and became a contributing member of the band, putting her skills with the mellophone to good uses as she traveled with the team to their bowl game during her freshman year.

“The Rockets didn’t win, but it was still a really excellent experience.”

She no longer plays with the band, but she’s since taken the same approach to a variety of very different roles and experiences on the UToledo campus and around the world. She’s become a swim teacher and lifeguard at the Rec Center, studied abroad in Japan while volunteering with military families and taken a leadership position within the Beta Alpha Psi honors fraternity.

But the best example of her persistence and adaptability comes from her current position as a student member of the UToledo Board of Trustees. She applied for the position thinking there was little chance she’d get a call back.

“I remember applying for the position and reading the biographies of previous student trustees, thinking there was no way I had a shot at this position. They were just so accomplished in their time here,” she said.

But she did get a call, and, thanks in part to her extensive preparation as a member of the College of Business and Innovation, aced the interview process, including a key conversation with Ohio Governor Mike DeWine. Now, she’s doing her best to bring a student’s perspective to the Board of Trustees, all while balancing multiple internships related to her major and as a student in the Jesup Scott Honors College.

“I think that unless you are on a board like this, you don’t really realize what’s going on in the background,” she said. “But my job is to bring the voice of the students to the board so when the board is making their decisions, they know how the students feel and what they’re thinking. A lot of our administrators have been out of school for a while. Things can change drastically from how they were 20 or 30, even 10 years ago.”

That Dangler has reached this level at the University is not a surprise to those that know her. Her reputation for identifying what she wants and working to get it is well-earned.

“Rebecca is a remarkable student and creative problem-solver,” said Dr. Heidi Appel, dean of the Honors College. “You can drop her into a new situation and she quickly figures out a way to navigate and improve it. Add to that strong communication and organizational skills and you have an exceptional leader.”

And after she wraps up her time on the Board of Trustees, Dangler has her next challenge already picked out.

“I’m really interested in forensic auditing. I want to do something where you can investigate financial statements and figure out where the money has gone,” she said.

Jobs like that typically demand nearly a decade of experience and a graduate degree, a tall order for any student. But as she’s shown many times already, there’s a process for achieving your dream. And Dangler already knows what she wants.