In the race against climate change, physicists at The University of Toledo are pushing the limits of solar electricity to ensure a clean energy future.

Through an innovative project that combines two types of solar cells and harvests light not only from the sun but also light reflected off the ground, researchers are creating technology to develop stronger and longer-lasting solar panels. 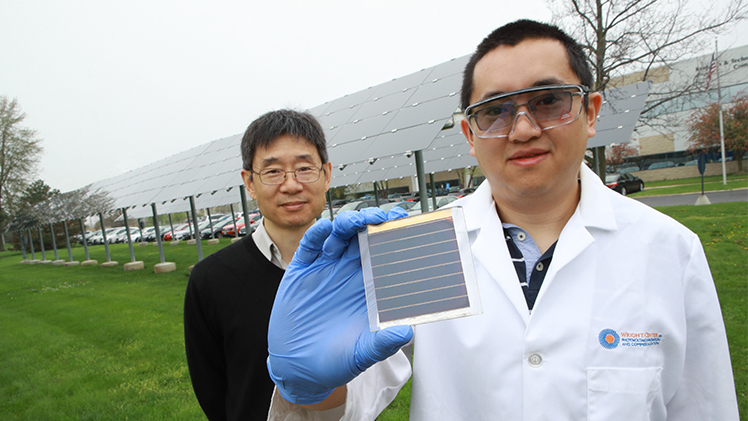 UToledo is a world leader in the investigation of an advanced material called perovskites, a compound material with a special crystal structure that can be used to create less expensive and highly efficient solar cells.

The U.S. Department of Energy awarded UToledo a one-year, $300,000 grant to advance research that could lead to the integration of promising perovskite solar cell technology into existing production lines for cadmium-selenide-telluride (CST)-based solar cells, maximizing the performance of thin-film tandem solar cells and reducing the costs of energy.

The team is led by Dr. Zhaoning Song, research assistant professor in the College of Natural Sciences and Mathematics, and Dr. Yanfa Yan, Distinguished University Professor of physics, who previously set the world record for the conversion of sunlight to electricity using perovskites and increased total electrical power generated by using two different parts of the sun’s spectrum.

“Based on theoretical calculation, the monolithic bifacial tandem design can boost the output power density limit of conventional CST solar modules by up to 50% with a light color concrete ground,” Song said. “Our proof-of-concept device demonstrated a greater than 25% conversion efficiency improvement.”

UToledo’s project is one of 40 across the country selected for funding by the U.S. Department of Energy Solar Technologies Office out of a total of nearly $40 million invested to advance the next generation of solar, storage and industrial technologies necessary for achieving the Biden administration’s climate goal of 100% clean electricity by 2035.

Specifically, the projects will reduce the cost of solar technologies by increasing the lifespan of photovoltaic systems from 30 to 50 years, developing technologies that will enable solar to be used in fuel and chemical production.

“Northwest Ohio continues to play a leading role in shaping the national and global response to the crisis of climate change,” said U.S. Representative Marcy Kaptur, who serves as chair of the House Appropriations Subcommittee on Energy and Water Development. “The University of Toledo is on the front lines of this effort, and its work to advance next-generation solar technologies will play a critical part in delivering the affordable, reliable, low-emission energy we need for our success in the 21st century.”