University of Toledo offensive lineman Lavel Dumont will be among nine honorees at the 2021 Stan Musial Award for Extraordinary Character Banquet in St. Louis on Saturday, Nov. 20.

The Musial Awards — presented by Maryville University — celebrate the year’s greatest moments of sportsmanship and those in sports who embody class and character. The national event and its awards are named for St. Louis Cardinals legend Stan Musial, a beloved baseball superstar and civic icon who personified sportsmanship. 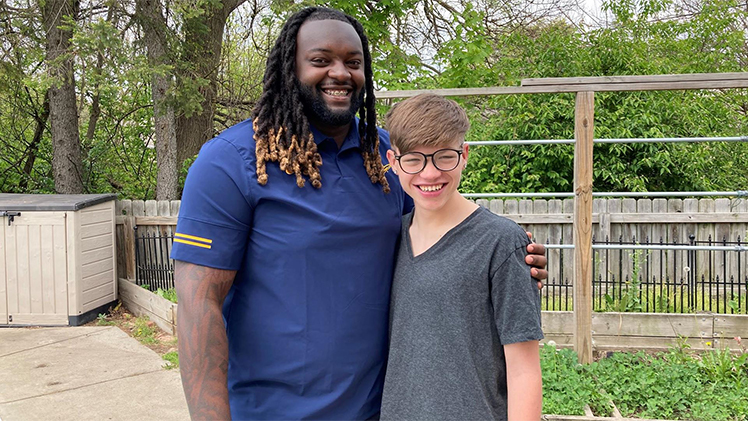 The heartwarming bond that developed between 6-4, 300-pound lineman Lavel Dumont and then 15-year-old football fan Wyntr Kinsley is being celebrated as one of the year’s greatest moments of sportsmanship.

Dumont was selected to receive the Musial Award for extraordinary sportsmanship thanks to an inspiring gesture of caring and kindness he showed to a Toledo-area teenager and the impact he has made. During summer, 2020, when driving from his apartment to campus, he would often notice Wyntr Kinsley throwing a football by himself in his yard.

One day, Dumont decided to pull over, introduce himself and invite Kinsley to a Toledo football game. From there, a heartwarming bond developed between the 6-4, 300-pound lineman and the then 15-year-old football fan.

Unbeknownst to Dumont when they met, Kinsley has experienced several life challenges. He has a heart condition that required numerous surgeries, resulting in some developmental delays. He also moved to Toledo just before the COVID-19 pandemic began. So meeting and making new friends has not been easy.

All of that made Dumont’s spontaneous decision to say hello and befriend a youngster he didn’t know even more meaningful.

“Lavel’s kindheartedness, humility and sheer decency embody the spirit of the Musial Awards,” said Marc Schreiber, executive producer of the Musial Awards. “As with many of our honorees, Lavel felt he was simply doing the right thing. That of course is true, but his friendship with Wyntr also serves as a wonderful example of what kindness and selflessness can do.

“We admire the initiative Lavel took on his own to do the right thing and the genuineness he has exhibited in bringing hope and happiness to a young fan. Lavel is most deserving of an award that stands for class, character and sportsmanship.”

“I was surprised, but extremely grateful and honored to be chosen for the Musial Award,” said Dumont, a sophomore majoring in communication at UToledo. “It’s a blessing to be acknowledged in this way, but the biggest blessing is being able to spread joy and kindness and meet a new friend. Wyntr and I really bond through our love of the game of football, and I feel that’s really what it’s all about.”

In addition to being honored at the Musial Awards in St. Louis, the story of Dumont and Kinsley’s friendship will be celebrated in the Musial Awards broadcast, which will air nationally on CBS on Christmas Day at 5 p.m.

The Musial Awards is produced by the St. Louis Sports Commission and the National Sportsmanship Foundation, a charitable nonprofit organization.

The event takes place annually on the Saturday before Thanksgiving at the historic 3,000-seat Stifel Theatre in Downtown St. Louis. In addition to keeping Stan The Man’s legacy alive, the mission of the Musial Awards is to encourage kindness, selflessness, integrity and civility in sports and society — and to inspire people across the nation to be good sports. Since 2011, Maryville University has served as the presenting sponsor. The school’s involvement, leadership and generosity have helped make the Musial Awards the most inspiring night in sports.