Through November The University of Toledo celebrates Native American Heritage Month, a tribute to the rich ancestry and traditions of Native Americans who lived in North America thousands of years before the Vikings landed. 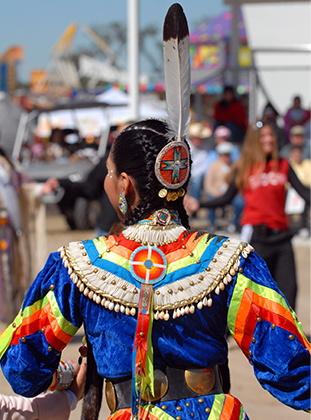 “It is well past time for non-Indigenous Americans to honor the presence and importance of the First Peoples who were here originally and who are still here today,” said Dr. Barbara Mann, a professor of humanities in Jesup Scott Honors College.

“Indigenous Americans created great cultures, including the massive Mound Cultures of the Ohio and Mississippi River valleys as well as the world’s second-oldest constitutional democracy, the Iroquois League, founded in the year 1142 C.E. — 63 years before the Magna Carta was signed.”

Among scheduled virtual events hosted by the Office of Multicultural Student Success, The Effects of COVID-19 on The Native American Community conversation from noon to 1 p.m. Thursday, Nov. 12, and the Land Acknowledgment Unveiling Program from 4 to 5 p.m. Monday, Nov. 16.

In a Land Acknowledgement Statement, UToledo recognized “the region of Ohio in which the University sits is the ancestral homeland of the Odawa, Seneca and Erie and as well as places of trade of indigenous peoples, including the Anishinaabe (Ojibwa, Potawatomi), Eel River, Lenape, Kaskaskia, Kickapoo, Miami, Munsee, Peoria, Piankashaw, Shawnee, Wea and Wyandot.”

“As a steward of public lands, it is our responsibility to understand the history of the land, the peoples who came before us and their continuing ties to this place,” the statement said. “We thank them for their strength and resilience in protecting this land and aspire to uphold our responsibilities according to their example.”