As soon as Maria Mauder saw the email about a toilet-painting contest for World Toilet Day, she shared it with coworkers and then shared in the giggles.

“We all laughed at the ridiculousness of painting a toilet,” she said. 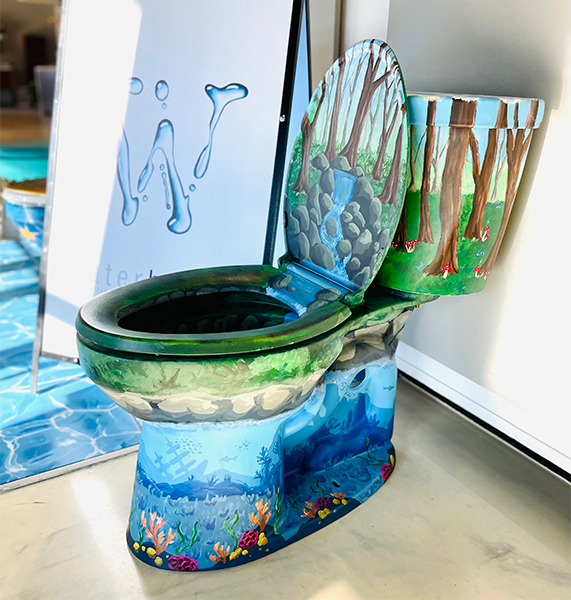 Maria Mauder transformed this toilet into a forest and deep sea for a toilet-painting contest by Waterhouse Bath and Kitchen Studio in Perrysburg for World Toilet Day.

But the 18-year-old freshman who is studying fine arts at The University of Toledo reconsidered the contest by Waterhouse Bath and Kitchen Studio in Perrysburg to be a creative challenge.

“The more I thought about it, the more I realized that this was a unique opportunity that I might never have again,” said Mauder, who is from Toledo. “I’ve painted a few 3D surfaces before, but never anything as complex as a toilet. The challenge is what intrigued me.”

And so she entered the contest, which was open to artists ages 14 through 19. With two weeks to reimagine a commode as canvas, Mauder, with help from a coworker and good friend, transformed a toilet into two terrestrial hemispheres: a magical forest with a babbling brook and lush greenery and a deep sea teeming with aquatic life and plants, as well as a sunken pirate ship.

The pair had painted just about every open space, including, for example, the inside of the toilet bowl, which features a waterfall on the back cascading into the bottom, with rocks and grass painted on the outer edges.

“They covered every inch of the toilet,” Siders said. “Even the back of it. I had no idea that there would be this amount of detail, this amount of design work that would go into it and creative planning.”

Mauder’s initial concept wasn’t Earth-based but more in the heavens. But a galaxy theme wasn’t particularly inspirational to her artistic sensibilities.

“There’s only so much we could have done with a space theme,” she said. “I think by going with our forest/underwater combo we used the shape of the toilet to its fullest potential instead of fighting against it — especially with the waterfall. That’s the part I’m the proudest of. The way it flows into the toilet bowl is my favorite feature.” 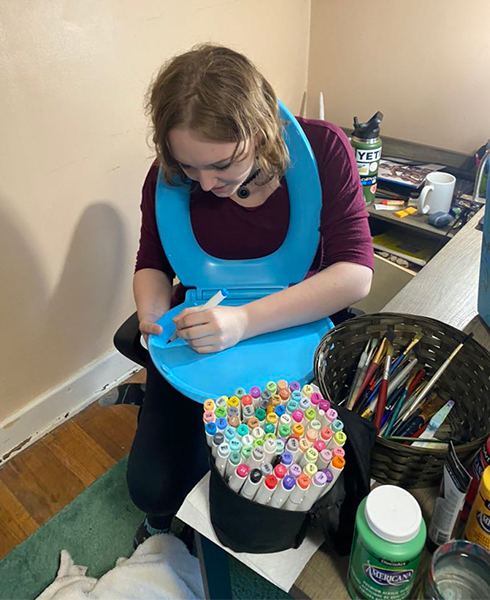 Mauder’s toilet art is one of five in the competition, including a painted toilet by fellow UToledo fine arts student Jacob Gigax. The first- and second-place winners, as voted by the public in person at the Waterhouse showroom, 125 E. Indiana Ave. in Perrysburg, and online, will receive a prize donated by Kohler, which also donated the toilets for the contest.

The contest is open through 4 p.m. Friday, Nov. 19 — World Toilet Day — and all toilets are on display in the Waterhouse showroom.

There will be an online auction Saturday, Nov. 20, as well, with all proceeds split between the winning artist’s charity of choice and water.org.

Siders said she was originally looking for a “themed” day as a marketing tool when she came across World Toilet Day, which was created 19 years ago by the United Nations to address the billions of people who do not have access to a sanitary, working toilet.

“It turns out something I thought was silly is actually quite serious,” she said.

Siders said she also wanted to give local young artists an opportunity to experience a unique project that would test their creativity in ways they had never considered, much less encountered.

For Mauder, the contest has proven to be multi-educational. 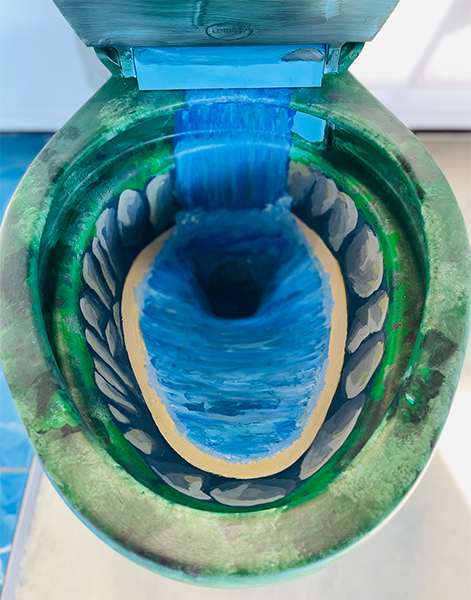 The toilet’s painted waterfall and how it flows down into the bowl is Mauder’s favorite feature.

“I’ve never completed a project of this size before, and I haven’t really entered many art competitions either,” she said. “This project also challenged me in a lot of different ways. Compositionally, this piece was difficult to plan out in a way that agreed with the contours of the toilet, but I learned a lot about working on non-regular surfaces.

“We spent so much time on this project, and I am super grateful to Waterhouse and Kohler for not only giving us the opportunity to do something so unique, but also allowing us to contribute to a great cause.”

Since Mauder began drawing at a young age, artwork has been “integral” to her identity, “not only because it’s how I express myself, but also because I’ve been doing it for so long.”

Pushing herself as an artist is a vital part of her creative growth and evolution. And being at The University of Toledo is the next step in that development.

“I’ve grown in experience and skill level, and my style, methods and materials have changed, but there has never been a doubt in my mind that this is what I was meant to do,” she said. “I know I still have a long way to go, but just from being here at UToledo for one semester I’ve already seen a change in my work and what I’m capable of as an artist, and I look forward to continuing to grow in my abilities.”