Toledo Safety Named to ‘Freshman of the Year’ Watch List

Toledo safety Maxen Hook was named to the watch list for the fourth-annual Shaun Alexander Freshman of the Year Award, presented to the outstanding freshman player in college football.

The winner of the 2021 Shaun Alexander Award will be announced on Monday, Jan. 10. The formal presentation of the award, along with several top awards in college and professional football, will be made at the Maxwell Football Club Awards Gala hosted by Tropicana Hotel and Casino Atlantic City on March 11, 2022. 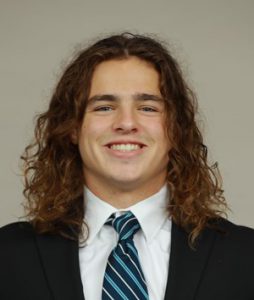 Hook, from New Palestine, Ind., leads the Rockets and is ninth in the Mid-American Conference with 71 tackles. He returned a blocked punt 35 yards for a TD vs. Norfolk State on Sept. 4, and also blocked a punt vs. NSU.

The Shaun Alexander Freshman of the Year Award has been presented to the College Freshman Player of the Year since 2018 and is named in honor of Shaun Alexander, a former standout at the University of Alabama and with the Seattle Seahawks in the NFL. Past winners are Trevor Lawrence (Clemson) in 2018, Kenneth Gainwell (Memphis) in 2019 and Will Anderson Jr. (Alabama) in 2020.