Nursing Student Enjoys the Personal Side of Healthcare

A third-semester nursing student at The University of Toledo, Waszak is deep into his clinical rotations. And even though he’s working in several different medical settings simultaneously, he’s focusing on one thing above all: building relationships.

“I have four or five patients in a 12-hour shift,” Waszak said. “You get to know them really well. They call it holistic care because it’s more than just medicine. Building those relationships is about mind, body and spirit.” 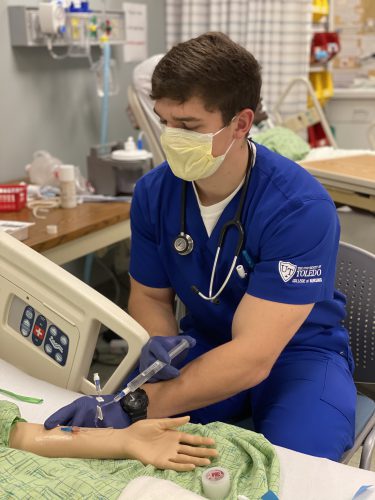 Though he’s well on his way to mastering that approach now, nursing wasn’t always the plan. Waszak began his educational journey as a pre-med student at The University of Notre Dame, competing on the dive team for the Fighting Irish as well. But after a difficult start, he spent a year at community college before ultimately enrolling in UToledo’s nursing program, a transition that wasn’t without its challenges.

“It was tough at first,” he said. “But then, once I was actually going through and got accepted into the program, I felt like I was going somewhere with my life. I felt like I had a direction again. And I’ve actually found through my clinical experience it’s more meaningful to me to go through more of a bedside care kind of setting.”

Now, Waszak is putting in serious work both in and out of the classroom, managing clinical rotations in cardiac, psychiatric and pediatric units, with each one presenting new challenges — challenges he meets with help from a team of other clinicians at UTMC. He says that has been a crucial part of his development as a nurse.

“You get to see a whole variety of people, how they function,” Waszak said. “It’s different each time and you get to see how different people do different things and how they do their jobs a little differently. Obviously, we have the same goal in mind, but it builds a dynamic of teamwork and working within a team because that’s what you are. We all want the same thing for the patient, and being able to have access to that early on, now, before my career even really starts, it’s a fantastic opportunity.”

For his part, Waszak is fitting in with the team just fine. That’s no surprise to Patty Sopko, one of his instructors at UToledo. She believes he’ll be a key contributor no matter where he ends up in the healthcare industry.

“He will be a tremendous asset to any healthcare institution,” she said. “He is caring, compassionate and will be a strong advocate for his patients and their families. He also will be a great leader in the field of nursing as he gains experiences and grows. He is not only excellent in the science of nursing but is as excellent in the art of nursing. And that is rare to find in one person.”

Though Waszak’s not quite sure where he’ll end up, he said he’d ideally like to combine some of the clinical work he’s doing now into one role, potentially working in pediatric cardiology. Wherever he goes, he’s excited to join a healthcare team that gives him the chance to work closely with the people who need care most, something he may not have been able to do as a doctor.

“Instead of staring at charts all day, you’re working with your patients. You’re seeing what’s wrong with them and putting a care plan together that way instead of just reading a textbook.”