Strokes are serious medical emergencies that can become life-threatening in a matter of minutes as blockages or bleeding starve the brain of oxygen.

But for those who suffer a hemorrhagic stroke, the neurological damage can continue well after the bleeding stops.

“In the days following a hemorrhagic stroke, survivors often experience an exaggerated immune response that significantly worsens their prognosis,” said Dr. Zahoor Shah, a neurobiologist and stroke researcher in The University of Toledo College of Pharmacy and Pharmaceutical Sciences. “Stopping the bleeding and restoring the brain’s supply of oxygen is critical to save a patient’s life, but we also need a way to treat those secondary injuries.” 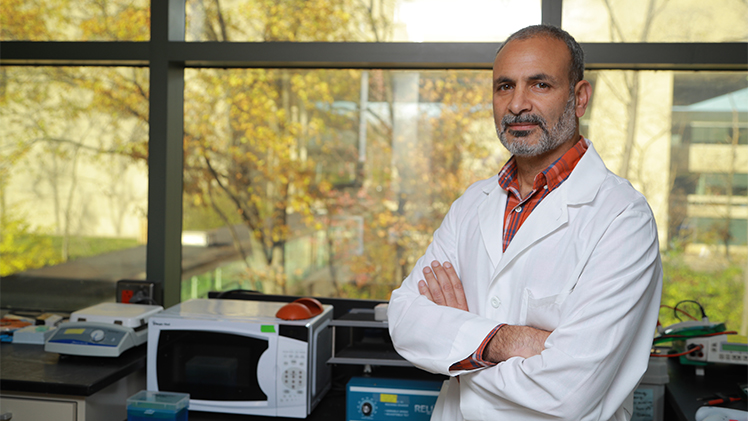 Dr. Zahoor Shah, a neurobiologist and stroke researcher in the UToledo College of Pharmacy and Pharmaceutical Sciences, is leading critical research to boost hemorrhagic stroke recovery.

Shah’s ongoing research could hold the key to giving survivors of hemorrhagic strokes a better chance for a more complete recovery.

The professor and vice chair of the Department of Medicinal and Biological Chemistry has devoted years of research to more fully understanding how the brain’s harmful immune response is unleashed following a stroke.

Earlier this year, Shah was awarded a five-year, $1.95 million research grant from the National Institutes of Health to develop new therapeutics that could prevent those secondary injuries.

Only about 15% of strokes in the United States are hemorrhagic. Unlike ischemic strokes, which are caused by a clot, hemorrhagic strokes occur when a weakened blood vessel suddenly bursts.

In addition to cutting off the brain’s supply of oxygen, hemorrhagic strokes can also lead to dangerous swelling as blood pools in the brain. Surgical intervention can relieve pressure and stop the bleeding, but roughly half of the patients will die within a week.

For those who do survive, the neuroinflammation brought on by the brain’s immune response is particularly problematic.

“The microglia response is usually helpful,” Shah said. “They identify any foreign body, infection or protein that’s not required and try to clear the debris. In the case of a hemorrhagic stroke, they sense the injury and try to help, but they get overactivated and bring inflammatory markers. It’s a vicious cycle of activation and reactivation.”

The inflammation brought on by that cycle further damages brain cells, leading to problems with language, motor skills, memory and other cognitive functions. While microglia activation occurs in all strokes, it is particularly pronounced in hemorrhagic strokes and is a major reason so few hemorrhagic stroke survivors make a full recovery.

Shah’s earlier research identified a protein called cofilin that plays a crucial role in launching the microglia into action and is also tied to memory problems and the death of brain nerve cells.

With the NIH grant, Shah will expand his study of cofilin with an ultimate goal of developing new drugs that can block its signaling following a stroke.

Shah’s team has already seen some promising early results from a drug tested in animal models, giving him hope a breakthrough treatment is within reach.

“The drug molecule we developed aided mice in the recovery process by preventing inflammation and improving cognitive outcomes. That was a really remarkable observation,” he said. “The NIH grant funding is going to help us develop on those molecules from our preliminary studies as we try to further substantiate those results.”