For Jonathan Kopacz, serving others is an integral aspect of his life. Growing up volunteering in soup kitchens and medical clinics, he has always been the first to say yes.

So when Kopacz, president of UToledo’s Blue Key Honor Society Chapter, received a call in May asking for his help in Ukraine over the summer, he jumped at the opportunity. 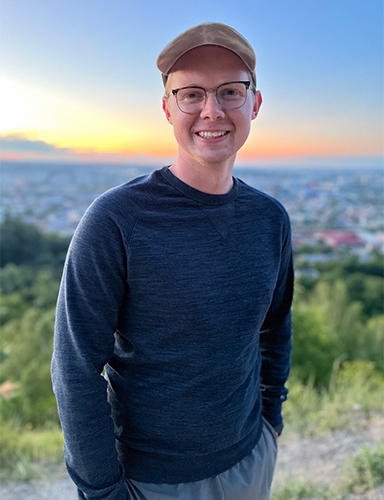 “Service isn’t about me, it’s about the people I’m serving,” said Kopacz, a senior biology student with a pre-med route. “It just felt like the right thing to do.”

Two months later, he was on a plane to Warsaw with two other men – Ken Leslie (who called him in May) and Don Curtis.

Splitting their time between Warsaw, Poland and Lviv, Ukraine, the trio spent six days fostering relationships with like-minded individuals and meeting people fighting on the frontlines of the war.

“We didn’t want to make too much of a schedule because it is really hard to find places to volunteer online; we had to be able to meet people on the street and figure it out,” Kopacz said. “It was interesting to see how we ended up meeting the people we did. We met Oksana, our main point of contact in Lviv, on our bus, but what if she had taken a different bus that day?

“Seeing how all of these things worked together was absolutely incredible.”

Most of the group’s hands-on work consisted of supplying food, blankets and other necessities to those who needed it, and learning about the implications of the war.

“On our last day, we shared a meal with some of the individuals we met,” Kopacz said. “We had Oksana, who lived there her whole life and worked as an archivist, a military soldier and several volunteer organization helpers. Through all these different people, regardless of the perspective they had, they all shared the perspective of ‘When we win the war.’

“It was beautiful to see how the war has, for the most part, united the country. It can either tear you apart or bring you together, and from what we saw, it definitely brought Ukraine together.”

Wanting to continue their service after the trip ended, upon their return to the U.S., the three men founded a small organization, Sky and Sunflower Mission, with their new friends in Ukraine and Poland.

The charity initiative provides support for humanitarian aid checkpoints for internally displaced persons in Ukraine and Ukrainian refugees in Poland.

“We raise the funds over here, send it directly to our contacts in Ukraine and Poland and then from there they can go into the local community and buy the supplies that they need,” Kopacz said. “All of the money goes directly to the people who need it.”

Since returning to his hometown of Ann Arbor, Kopacz has had time to reflect on his experience and the people he met. 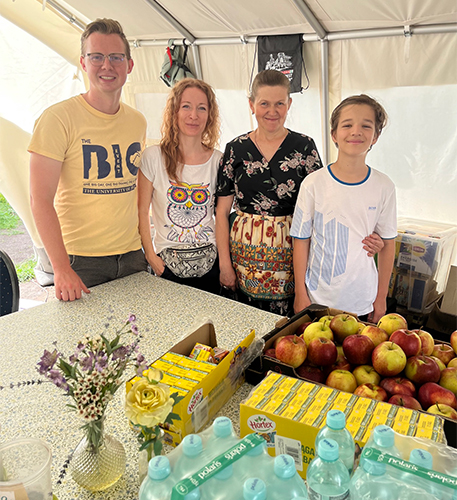 When Jonathan Kopacz, president of UToledo’s Blue Key Honor Society Chapter, received a call in May asking for his help in Ukraine over the summer, he jumped at the opportunity.

“This trip has opened my eyes in a profound and new way,” he said. “Oftentimes with service you try to impact people, but it starts with one person. It’s the personal one-on-one interactions where you build that connection with the person who has the greatest impact.”

Between opportunities to participate in cancer research with professors and sit on the boards of service clubs, Kopacz said he has been given a lot of opportunities at the University.

“I have gotten a lot out of my experience here at Toledo. I’m very thankful to have had this role at Blue Key because it’s a time I can finally give back,” Kopacz said. “It is great just to work with and meet so many other people.”

Dr. Sammy Spann, vice president of student affairs and dean of students, who works with Kopacz through Blue Key, said he looks forward to seeing what the Rocket does in the future.

“Jonathan is a smart and ambitious young man,” Spann said. “He is a good steward and really cares about others. He will definitely go far.”

Kopacz has been accepted into The University of Toledo Medical School and plans to specialize in oncology or ENT (ear, nose and throat conditions).

No matter his direction in medical school, Kopacz said he wants to continue his service to the community.

“My goal after completing medical school is to stay in Northwest Ohio and open a free medical clinic,” he said. “It is something I have felt strongly about ever since coming to Toledo.”