Pharmacy students from The University of Toledo came away from the American College of Clinical Pharmacy’s annual meeting with a pair of honors, including a first-place finish in a national pharmacy knowledge competition.

The victory in the quiz bowl-style Clinical Pharmacy Challenge is the college’s first. UToledo made the quarterfinals in 2019 and 2021. 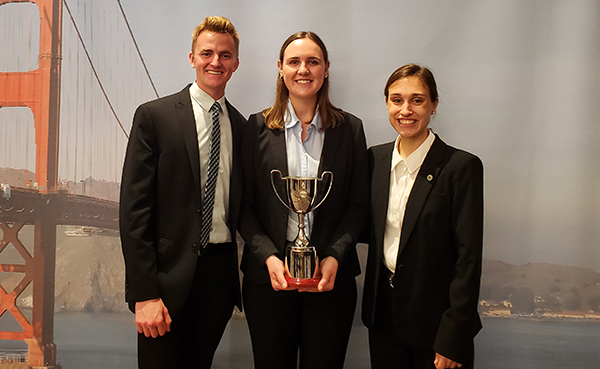 Representing UToledo were, from left, Ethan Shell, Alana Knapke and Christina Beran — all of whom are students in the Doctor of Pharmacy Program.

UToledo also was recognized for earning the ACCP Outstanding Student Chapter Award at the annual meeting, which was held in San Francisco.

“Both of these are huge accomplishments. This meeting gives us a national stage to show the strength of our program and dedication of our students,” said Dr. Julie Murphy, associate professor of pharmacy practice in the UToledo College of Pharmacy and Pharmaceutical Sciences. “I think we made a great impression on everyone who was there.”

A total of 114 schools participated in this year’s Clinical Pharmacy Challenge, which quizzes students on a range of general knowledge and clinical case-specific questions.

Representing UToledo were Alana Knapke, Ethan Shell and Christina Beran — all of whom are students in the Doctor of Pharmacy Program.

After a series of online rounds, the top eight teams earned a spot in the live competition. UToledo topped the University of Tennessee in the final round.

“It was a really exciting and rewarding experience to show others what I’ve learned throughout school and compete on a national level with really renowned pharmacy schools,” said Knapke, a fourth-year student who served as team captain. “Going into it I was a little nervous — we were competing against the best of the best, in person — but it was exciting to do so well for our college.”

Knapke, who led a team that came in third in a separate ACCP student competition last year, and her teammates spent the summer preparing for the competition, brushing up on everything from pediatrics to geriatrics.

“I was so impressed by how well prepared they were. They really showed their breadth of knowledge,” Murphy said. “Something specific about these three students that sets them apart is their curiosity. They go the extra mile to understand and learn. That curiosity will make them better pharmacists.”

The outstanding student chapter award is presented annually to the chapter that best embodies the five core values of ACCP — dedication to excellence in patient care, clinical research, education, advocacy and professionalism.

Chapter president Madeline Gutta, a third-year doctor of pharmacy student who is also pursuing a master of business administration, accepted the award on behalf of UToledo.

UToledo’s chapter hosts monthly meetings on professional development and holds CV workshops, residency panels and an annual student research symposium. It also hosts an annual trivia night that has raised more than $10,000 for the UToledo CommunityCare Clinics over the last nine years.

“It’s a great organization and being part of it has been a very rewarding experience,” Gutta said. “It’s helped develop my leadership skills and opened my eyes to numerous possibilities for after school.”

UToledo’s ACCP student chapter plans to use the $1,000 it received for winning the Outstanding Student Chapter Award to offset the costs of hosting a leadership summit for students in the ACCP chapters at Ohio’s other six accredited pharmacy schools.