Toledo Travels to Buffalo With Division Title Still on Line

The Toledo Rockets face a must-win situation when they travel to Buffalo to take on the Bulls Wednesday, Nov. 20. 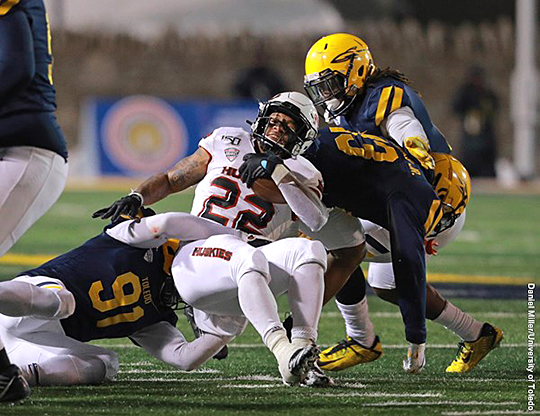 Toledo faces a must-win game at Buffalo Wednesday, Nov. 20, to stay in the hunt for the MAC West Division title.

Toledo (6-4, 3-3 Mid-American Conference) is still in the hunt for a MAC West Division crown and a chance to appear in the MAC Championship Game. However, the Rockets have no margin for error; they must defeat Buffalo and Central Michigan in the regular-season finale — and also get some help from other teams.

The Rockets are in a tie for fourth place with Northern Illinois in the MAC West. Western Michigan (5-2) leads the division, followed by Central Michigan (4-2) and Ball State (3-2). Toledo needs all of those four schools to lose at least one game (two in the case of Ball State) to have a chance at a title.

Toledo is coming off a 31-28 loss to NIU Nov. 13. The Rockets trailed by 21 points before rallying with three touchdowns in the fourth quarter. But NIU kicker John Richardson made a 25-yard field goal with 41 seconds remaining that capped a 13-play, 68-yard drive to put the Huskies up 31-28. On its final drive of the game, Toledo made it all the way to the Northern Illinois 31-yard line, but time expired before quarterback Eli Peters could spike the ball to attempt a game-tying field goal.

Buffalo (5-5, 3-3 MAC) is coming off a 30-27 loss at Kent State Nov. 14. The Bulls were up 27-6 in the fourth quarter before Kent State rallied to win. Buffalo has the No. 1 defense in the MAC, holding opponents to 23.1 points and 292.8 yards of total offense per game. Junior defensive end Taylor Riggins leads the MAC with 10 sacks. Sophomore running back Jaret Patterson is second in the league with 1,136 yards rushing.