Growing up, Jada Bouyer tried just about every sport you can think of.

But it wasn’t until seventh grade, when she tried out for her middle school volleyball team, that she found the right sport for her.

Off the court, though, Bouyer’s other passion developed at a much earlier age.

A junior opposite hitter on Toledo’s women’s volleyball team, Bouyer is a pharmacology-toxicology major and will graduate with her bachelor’s degree Saturday, Dec 17.

Bouyer’s mother, Kira, remembers when the science craze started. When Bouyer and her family moved to Ohio when she was 2, the Bouyers befriended another couple with a daughter the same age. Her friend’s mother was a science teacher, who helped expose Bouyer to a whole new world.

When Bouyer was in middle school, her recent affinity for volleyball and her lifelong love for science merged by sheer chance.

When attending a volleyball tournament, Bouyer and her mother ran into a young woman at a grocery store wearing college apparel from two different schools, one of which was The University of Toledo.

They struck up a conversation, and their new acquaintance mentioned that both schools had a pharmaceutical sciences program that she had been interested in. She also mentioned “Pharm Camp,” a summer camp for high school students that UToledo’s College of Pharmacy and Pharmaceutical Sciences has offered since 2001. 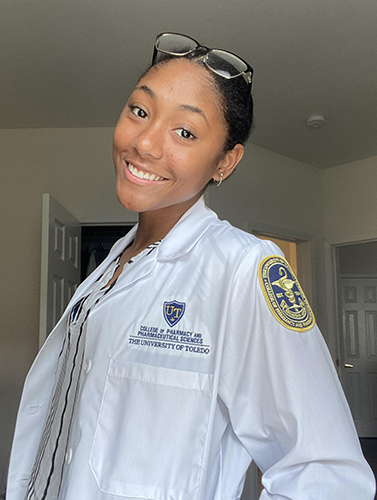 Jada Bouyer will graduate with her bachelor’s degree in pharmacology-toxicology on Dec 17.

“We waited until Jada was old enough to attend Pharmacy Camp,” Kira said. “She eventually attended the pharmaceutical sciences summer camp at Toledo one year, and the rest is history.”

When the time came for Bouyer to pick a school, the perfect confluence of academics and volleyball made The University of Toledo a natural choice.

“I knew it was home the moment I stepped on campus,” Bouyer said.

Now in her fourth year on the volleyball program after redshirting in 2019, Bouyer broke out to become one of Toledo’s most important players. She averaged 2.3 kills per set this season and played in every match, earning Tournament MVP honors at a non-conference tournament at Arizona State earlier this season.

“Jada is a special student-athlete,” Oliver said. “She has grown so much over the years and has truly become such a strong, independent-minded individual. I value the work ethic she has shown in the classroom and in the gym. She is now seeing the fruits of that labor. Jada embodies everything we want in our student-athletes. She shows a precision in her work, poise in tough moments, and is passionate in everything she does.”

Jada’s passion is never more evident than when she discusses pharmaceutical sciences, which should come as no surprise. Interest in such a complex subject necessitates a curiosity and a desire to know more, which Jada exhibits in spades. 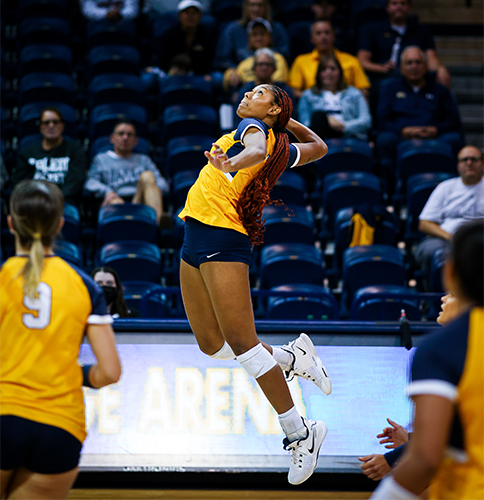 Bouyer is a junior opposite hitter on Toledo’s women’s volleyball team.

“A big part of it is learning how these things work, how the body works with these medications,” Bouyer said. “People take medications every day, whether it’s a pain reliever or to help control allergies, and I think it’s important to know how they work. If I take Advil because my head hurts, how does Advil know my head hurts? I can understand those types of things now which is really cool to me.”

Jada’s interest in science appears to be genetic as well; her brother, Christopher, shows the same level of passion for animals. Kira and her husband, Chris, couldn’t be prouder of their children for following their own paths and developing their own passions in life.

“As a parent, I would never get in the way of them pursuing their interests,” Kira said. “Anything that they wanted to try, we were willing to allow them to try. That has led her down this path. It’s been fun watching her grow and watching her not only play the sport she loves, but also to be able to follow this career path she genuinely loves.”

Bouyer’s career path is only just beginning. After graduating with her bachelor’s degree this December, she will be on track to receive her master’s degree next year. She is still deciding whether she wants to pursue a Ph.D. after that, but that’s a decision for another day.

“I think it would be interesting to go into experimental therapeutics,” Bouyer said. “I think that would give me even more freedom to create my own projects and potentially have my own lab or practice.”

But for the moment, instead of thinking ahead, Jada takes time to reflect on her time spent at The University of Toledo and how it has helped get her to where she is now.

“My experience at Toledo has been great,” Bouyer said. “I think I’ve grown as an athlete, but as a person too. I think that’s been my favorite part about being here.”