When Dr. Beata Lecka-Czernik joined The University of Toledo College of Medicine and Life Sciences in 2007, her field was seen by many as something of a curiosity. 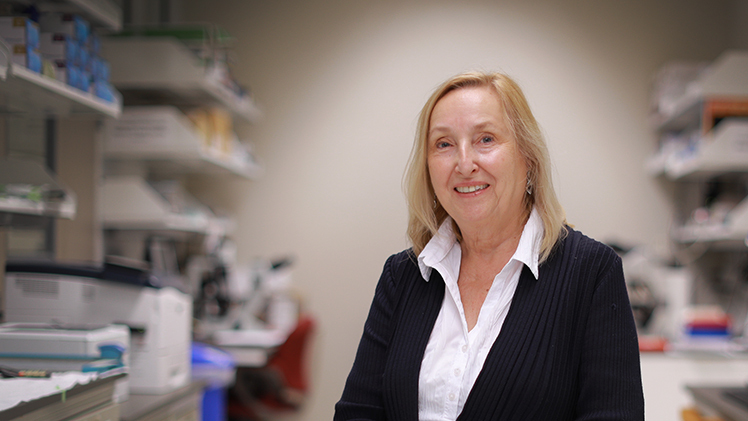 Dr. Beata Lecka-Czernik, a professor in the College of Medicine and Life Sciences, studies the connection between bone health and metabolic processes.

“At that time, there were very few people believing there even was an intersection,” she said. “It was novel research, but it has really made a lot of progress with time.”

Much of that progress has come from her own lab, which has made key discoveries about how some drugs used to treat diabetes can accelerate bone loss, and how a protein called PPAR-gamma that helps regulate insulin sensitivity also plays a role in the formation of new bone.

This fall, Lecka-Czernik received a five-year, $3.4 million grant from the National Institute on Aging to continue her work that’s ultimately aimed at developing a single therapeutic that could both normalize glucose levels and improve the mass and quality of bone.

Osteoporosis and Type 2 diabetes are both widespread in the United States. The National Institutes of Health estimates that 26 million Americans have Type 2 diabetes and twice that many either have or are at high risk of developing osteoporosis.

What’s more, weak bones and diabetes are often seen together. Lecka-Czernik said research has shown that diabetics suffer twice as many bone fractures as individuals without diabetes.

Her research team, which includes scientists from the Scripps Research Institute, will focus on better understanding the mechanisms of how processes in the bone are integrated with regulation of energy metabolism as they work to fine-tune an experimental drug they previously developed.

That compound, which has been patented by Scripps and UToledo, was found to be effective at regulating glucose and strengthening bone in a 2016 study published in the journal EBioMedicine.

Far from serving as a static scaffolding that supports our bodies, bones are constantly changing. One type of cell breaks down old bone and another type of cell creates new bone.

“You can think of it almost like a road crew,” Lecka-Czernik said. “One crew tears up the old pavement and the next crew comes along to lay new blacktop. In normal situations, they are coupled. As we age the destruction crew speeds up but the paving crew slows down, particularly in post-menopausal women.”

Most of the available therapeutics aimed at improving bone quality focus on slowing down resorption, or the process that breaks down old bone.

There is a relatively new drug that helps activate the cells responsible for building new bone by inhibiting the protein sclerostin, but Lecka-Czernik said some scientists have concerns that this drug may have a negative effect on the vascular system.

By targeting PPAR-gamma, which controls the expression of sclerostin, the experimental therapeutic she and her collaborators are investigating potentially gets around that concern.

And unlike some other insulin synthesizers that have been shown to speed up bone loss, the group’s experimental drug appears to do the opposite — building up healthier, stronger bones.

“If you have one pill that can take care of two pathologies which are common and often seen together, that could have a big impact for health. It could also have an economic impact, especially for the elderly who are spending a lot of money on prescription drugs,” she said. “Thirteen years ago, this was science fiction. Now it seems like a real possibility.”