As Elena Nassif’s time as a Rocket ends with Commencement on Saturday, Dec. 17, there’s the main theme that summarizes her time as a student: Don’t be afraid to seek out those who can help you.

It started with her sister, Carol, a pharmacy student at The University of Toledo, who was the first to help her with the decision to attend UToledo.

“She always spoke highly of her interactions through organizations, being on campus every day and getting attention from staff if she needed help,” Nassif said. “The University was close to me but at the same time, I came to campus and saw how people treated others.”

Nassif is graduating with dual degrees in management and Middle East studies at the age of 20.

A native of Syria and now a U.S. citizen, Nassif moved to Lebanon at the age of 8 when her family left Syria to escape its civil war. Her family moved again in 2016 to Toledo.

For her first semester as a Rocket, Nassif opted to take Arabic classes to fulfill her foreign language course requirement. Once in the class, however, the professor realized that Nassif was fluent in Arabic — and told her she couldn’t take the course.

Nassif was on a quest to talk to Dr. Gaby Semaan, associate professor of Arabic and director of Middle East Studies, who could help her get credit for her Arabic skills by taking an exam.

But there was a problem. She was just a few credits short of potentially losing her scholarship — and Semaan was not teaching that semester.

After finally connecting with Semaan, she decided to add Middle East Studies as a second major, which allowed her to complete research on freedom of speech and women’s rights in the Middle East. Nassif presented her research at an international conference — where she was one of the youngest scholars. 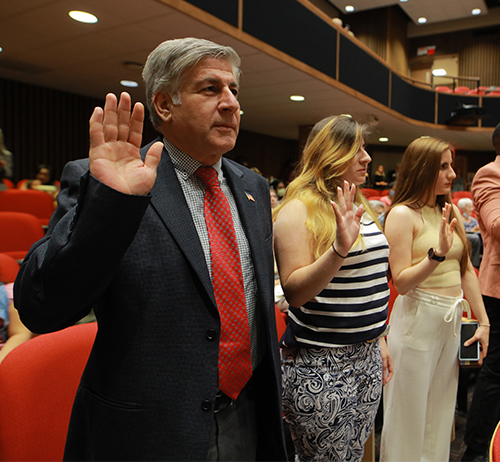 From right to left, Elena Nassif, her sister, Carol, and their father, Sam, at the Sept. 16 naturalization ceremony on UToledo’s Main Campus. A native of Syria, Elena moved with her family to Toledo in 2016.

Dr. Semaan, a native of Lebanon, became a mentor and close friend to Nassif. He helped her navigate a new culture in the U.S. and answered her questions about what she experienced as a child in Syria.

Semaan said he appreciates Nassif’s determination to learn about her new home’s culture and help others coming to the U.S. find their home and community.

“She silently supports newly coming international and Middle Eastern students and immigrants, especially those from war-torn Syria and trouble-filled Lebanon,” Semaan said. “She provides practical support by orienting the students to the campus and campus resources, classes and providing studying tips.

“She is a model student who turned hardships into opportunities and her story might be inspirational to other students.”

As Nassif wraps up her final courses, she reflected on who helped her succeed — and offered this advice to new and future Rockets.

“Once you go to UToledo, a lot of help will be given to you if you ask for it … Go for it and don’t think twice,” she said. “Don’t be afraid of the person in front of you. They’re not there to scare you, they’re there to help you.”

After graduation, Nassif said she hopes to go to graduate school to continue her studies and research on the Middle East. She has been accepted into programs in New York and Washington D.C.