The concept was simple: The Office of University Marketing and Communications was making a holiday video featuring Rocky lounging by a roaring fire and sipping hot cocoa.

With Rocky in his chair, his favorite song, “U of Toledo,” would play gently in the background, like an old-timey record. 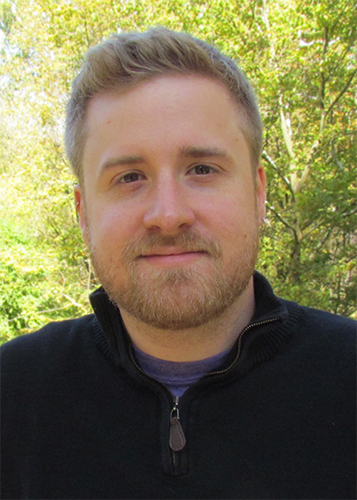 As Micah Lawson heard the concept from Dr. Lee Heritage, professor and Interim Chair of the Department of Music, the 29-year-old graduate music student reimagined the fight song as a fireside holiday instrumental in his head.

Led by a mellow piano, the song would be substantially slowed down to convey the relaxed mood, Lawson thought. And, of course, the addition of winter sleigh bells was a fait accompli.

Hours after accepting the task, Lawson was busy composing the initial draft of the song, beginning with reducing “U of Toledo” to its basic parts: melody and harmony.

“The style of the UToledo fight song is very energetic,” Lawson said. “It’s a fast-paced song so that it gets a lot of energy going and it works very well for that. My challenge was to write a very laid-back and mellow version of that. By boiling it down to its most basic parts, I was able to turn the song into the style I wanted.”

Using music composition software, Lawson worked out a gentle piano-sounding performance that played softly and accurately to his ears. And then he added the sleigh bells to the digital track to complete the song’s holiday vibe.

“They do that very well,” he said. “And the combination of the two instruments – the mellow piano and the sleigh bells – went a long way to evoking the holiday feeling that I wanted.”

With the initial “holiday piano arrangement” draft finished a few hours later, Lawson had his musical template to move forward with other versions.

He created a “slow holiday jazz arrangement,” with the addition of bass guitar and drums to the piano and sleighbells, which was the unanimous choice as the video’s musical accompaniment for the University’s annual digital holiday card shared by the president.

This isn’t the first time “U of Toledo” has been rearranged. Written in 1932 by Dave Connelly, UT athletic director and baseball coach through much of the 1930s and 1940s, “U of Toledo” was unchanged for decades until 1975, when UToledo associate professor of music David Jex arranged the version we know, love and sing.

Lawson’s holiday take on the fight song is his biggest composition project so far.

Heritage said when he received the request for someone to write music for this project, he knew immediately that Lawson “was the one.” 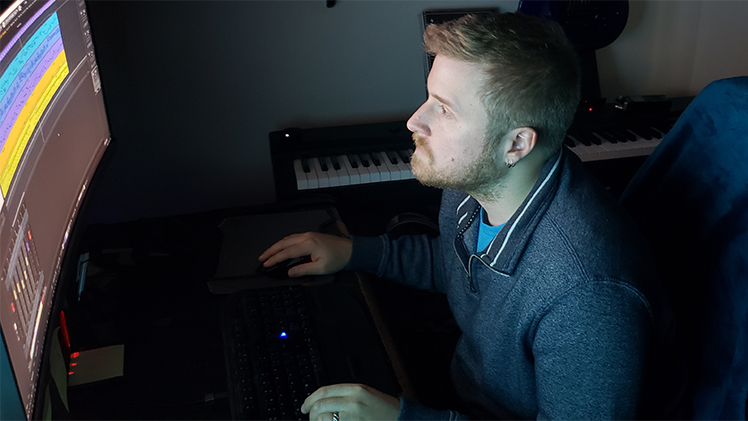 Micah Lawson created a “slow holiday jazz arrangement” of ‘U of Toledo’ at his home workstation to be the soundtrack to a new holiday video featuring Rocky.

“Micah Lawson is a talented, hardworking composer who writes wonderfully engaging music for media and the concert stage,” Heritage said. “As his composition professor, I look forward to seeing what he has composed each week for his composition lessons; he consistently brings fresh, new ideas to the table. He writes music quickly and there’s a wonderful sense of emotion and drama that is communicated in his music. He never fails to impress.”

Born and raised in Toledo, Lawson has composed music for much of his life. He wanted to make a major and career of writing music, but while at Springfield High School in Holland, he was steered towards computer science. He pursued that as a major initially at UToledo, leaving to graduate with his computer science degree elsewhere. After joining the workforce, Lawson realized he still wanted to pursue a career in music. He returned to UToledo in 2019.

“I met with instructors and advisors who were friendly and helpful,” Lawson said. “I saw it as a good place to go to pursue music. That turned out to be right.”

He graduated with his bachelor of arts degree in music in May, with a focus on composition and a minor in music technology. This fall, Lawson began his master’s in music performance; his goal is to teach music full time and to compose music for media on the side.

Perhaps his holiday fight song is the first of many soundtracks — or holiday playlists — to come.

Lawson said he expects to play the song with other holiday classics this year as he and his wife, Liz, decorate their Christmas tree.

He hopes that the Rocket community will enjoy it as well.

“I know the fight song is cherished,” Lawson said. “My goal was that I would do justice to the song for them and that they can take pride and enjoy the song over the holidays. That would be fantastic.”