Rob Grove never intended on being a UToledo student for 22 years.

But sometimes life gets in the way.

“Family is the most important thing, and then my job,” said Grove, a Gibsonburg resident. “If I don’t have the ability to support my family, I don’t have anything.”

First enrolling at UToledo in 2000 pursuing a bachelor of science degree in administrative services with the plans to later pursue a master of business administration degree, Grove’s tenure as a student lasted longer than his course; his original major was discontinued, and he is now set to graduate this fall with a bachelor of arts degree in interdisciplinary studies with a minor in business.

His original intent was to study part time at night and finish his degree in less than 10 years, but his job in sales at Dynics, Inc. kept him busier than he anticipated.

“I was traveling a lot with my job,” Grove said, “and then it was tough because my wife and I didn’t have our first child until a little later in life. Going to UToledo when my first child was born was difficult, especially because at the time there weren’t really any online classes.”

Grove took a break from classes to look after his family from 2011 to 2015. His first daughter was only 5 at the start of this, and he and his wife adopted their second daughter from China in 2013.

Now at 58, Grove said he is relieved to be in the home stretch. While completing his final class this semester, he has often thought about walking across the stage to finally receive his degree.

“It means a lot,” he said. “It’s a feeling of accomplishment that I have been able to stick it out. A lot of people have asked me why I am still doing it.”

“It has been something that weighs on my mind,” Grove said. “Will I ever finish this degree?”

In fact, there were several times when Grove felt like giving up on his studies; he has two associate’s degrees from Terra State Community College in robotics and electromechanical engineering and has been able to move up the ranks in his career without a bachelor’s degree. 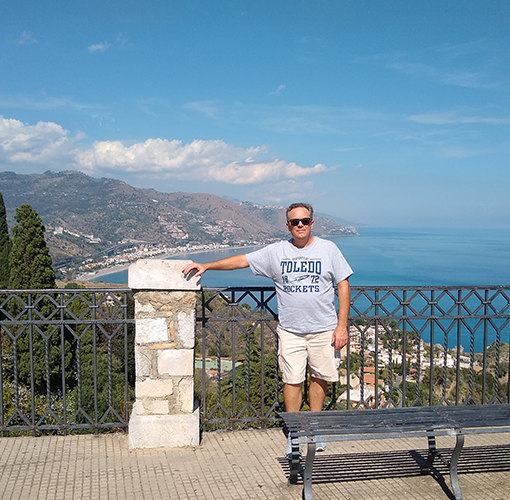 Robert Grove on vacation in Europe. Grove enrolled in The University of Toledo in 2000, but his busy work and family life extended his goal to graduate in 10 years by a dozen.

The principle of it all and his own discipline, though, helped carry him to the end.

“One of the reasons I kept going was the longer I was here, the more I was invested,” Grove said. “At the start of this year I told myself, if I don’t do it this year, I won’t do it at all.”

Another motivating factor for him to finish was the professional relationships he developed with UToledo faculty over the years. For example, he’s worked alongside Kim Pollauf, assistant dean of University College, his entire time as a student.

Pollauf is impressed by his determination to finish what he started two decades ago.

“It has been such a pleasure to be on this journey with Rob for the last 20 years,” she said. “Despite whatever is happening in his life, Rob has always returned to his program and chipped away, one class at a time, until it was done.

“His dedication is phenomenal and, I am sure, one of the reasons he has been so successful in his life.”

Two decades on, with a cumulative GPA of 4.0, Grove is finally ready for the next chapter of his life.

“I am currently the VP of sales at Dynics Inc,” Grove said. “We work in industrial automation and want to grow the company and gain market share with our new hardware and software.”

His role is demanding, so he said he is looking forward to finally being able to have extra time to relax.

“Once I’m finished with the degree it will give me back some of my free personal time outside of work for family.”