Scientists have studied silver for centuries.

However, silver nanoparticles that are too small for the naked eye to see — less than one-thousandth the width of a human hair — long remained a powerful germ-killing mystery. 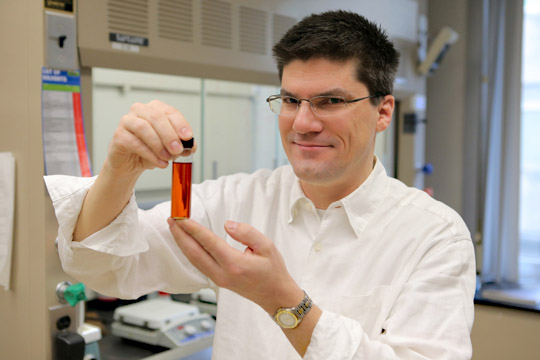 Dr. Terry Bigioni, professor in the Department of Chemistry and Biochemistry, held a vial of silver nanoparticles in liquid form.In new research published in the journal Science Advances, a chemist at The University of Toledo and his collaborators at Georgia Tech proved for the first time they can predict the molecular structure of a tiny, complex metal particle that physicians might use to fight infections, detect cancer and possibly kill tumors.

The pioneering research opens the possibility for the design of metal and alloy nanoparticles, including silver, gold, platinum and copper, to create new medical therapies and treatment.

“If you want to design a drug for use inside the human body, knowing the structure and how it changes and interacts within the body is critically important,” Dr. Terry Bigioni, professor in the UT Department of Chemistry and Biochemistry, said. “By knowing the positions of all the atoms that make up the silver nanoparticle, it’s possible for scientists to get much more sophisticated with how they use these for medical applications.” This graphic of the molecule appeared with the article titled “Confirmation of a de novo Structure Prediction for an Atomically Precise Monolayer Coated Silver Nanoparticle” in the journal Science Advances.

“They’re crude chunks of silver in those antibacterial applications,” Bigioni said. “None are the same. Each particle is a random collection of silver atoms, but that works because you want the silver particles to dissolve and form silver ions. That is what kills the bacteria. Because they are used outside the body, it’s OK that their structures are random and unknown. The rules are very different, though, if you are going to use a silver nanoparticle as an antibiotic or cancer marker inside the human body.”

With the support of a $400,000 National Science Foundation grant, Bigioni’s team opened the door to sophisticated design of new, advanced therapies by better understanding how these molecules are put together after making a prediction last year and conducting experiments to confirm the accuracy. The scientists observed, predicted and measured the structural, electronic and spectral properties of the monolayer-protected silver nanoparticle.

The research titled “Confirmation of a de novo Structure Prediction for an Atomically Precise Monolayer Coated Silver Nanoparticle” will be used to develop a structure forecasting method for silver nanoparticles not possible to measure in order to help scientists advance the understanding of the health impacts of these molecules.

Metal nanoparticles also can be used in other applications, from catalytic converters to electronics to sensors, which the UT work should accelerate.

“Chemists are very good at understanding how the atoms in most materials are connected, but this is an entire class of molecules where we didn’t understand these basic rules,” Bigioni said. “It’s even further complicated because they are capped by sulfur-containing ligands.”

For example, chemists had been unable to predict simple things with gold and silver nanoparticles, such as which sizes will form and what their shapes, structures and properties will be.

“That is now beginning to change,” Bigioni said. “Our research using a combined theoretical and experimental approach opens up a new, fascinating chapter for chemists. This is a landmark moment because if you know the properties of the structure, you can figure out the properties in great detail, how it works, what its functions are, and what it’s good at. It becomes possible to explore using the nanoparticles in a much more sophisticated way.”

The U.S. Air Force and the U.S. Department of Energy supported the work at Georgia Tech, which was led by Dr. Uzi Landman and performed by Drs. Bokwon Yoon and Robert Barnett.