Emma George was “that” kid. The one who pestered her parents with questions. Who always asked why. Who took things apart to see how they worked.

This month, George graduates from UToledo’s College of Pharmacy and Pharmaceutical Sciences as a double major in medicinal and biological chemistry and pharmacology/toxicology. She minored in chemistry.

George is one of the best students to come through the pharmaceutical sciences program, said Dr. James Slama, professor and director of the undergraduate program.

She worked in Slama’s lab, helping him in his research to develop a compound that would inhibit the release of calcium in cells.

“She did a good job with the detective work,” he said. “I’m confident that she will go on to become a very successful research scientist. It’s a pleasure to teach good students like Emma. Their enthusiasm is infectious, and their efforts on even a difficult project can drive our research forward.”

George has always been an investigator. In seventh grade, when she was first introduced to chemistry, she always had more questions. After conducting experiments in class, she’d do more research at home and watch online videos to gain a clearer understanding.

“I clicked with chemistry,” she said. “I realized this could be something that I could do the rest of my life.”

“I had the most amazing AP bio teacher,” she said, “who explained how the body worked and how chemical reactions fit into that.”

Autoimmune diseases run in her family, George said. Her mom has rheumatoid arthritis and when she was prescribed a new medicine, George would look it up and try to understand how it worked.

“Medicinal chemistry was 100% the right choice for me,” George said. “Research would directly benefit those suffering from illnesses.”

George came to UToledo with 35 college credits and was able to skip a year of pre-pharmacy coursework. She didn’t want to rush her college career, though, so she tried to find another program to add to her major. 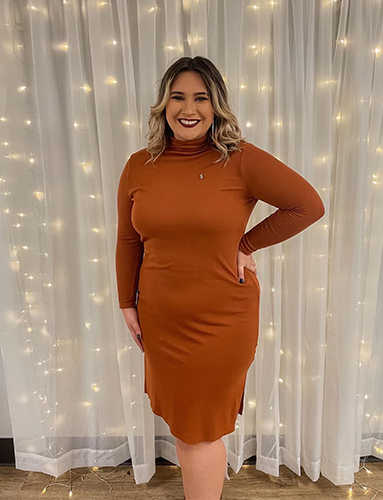 She landed on pharmacology/toxicology.

“It gave me the full range of pharmaceutics, from the basics of lab research and design to animal models,” she said.

While George loved her program and did well, she floundered a bit in her first year on campus. She was three hours from home and knew no one at UToledo. COVID made things worse.

“The one thing that kept me going was that I really loved my program and my coursework,” she said. “I loved the path I was on.”

Her mom eventually gave her an ultimatum — come home or join something to meet new people.

The next fall, while classes were still online, George took action. After chatting with her resident advisor, who was in a sorority, George decided to look into Greek life.

“I never saw myself joining a sorority. Who’s going to want the chemistry girl?” she said. [But joining Alpha Chi Omega] changed the course of my collegiate experience.”

She now had friends to rely on and things to do on the weekend. She joined the sorority’s executive board.

When the College of Pharmacy asked her to participate in the University’s Klar Leadership Academy, she accepted. She said she met students she would never have crossed paths with otherwise.

“It taught me so much,” George said. “It gave me basic leadership skills that are important everywhere in life.”

George also found her niche as a chemistry tutor. “It never felt like work,” she said.

Her fellow student tutors voted her Rookie of the Year in her first semester of tutoring.

“As a tutor, Emma is a powerhouse,” said Julie Radwanski, academic services coordinator at the Learning Enhancement Center and George’s supervisor. “Emma’s knowledgeable in many tough science courses and has a great ability to break down the hard topics and make them understandable. Students love working with Emma.” 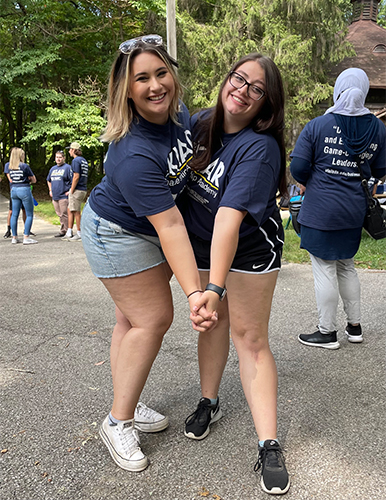 As a member of the University’s Klar Leadership Academy, Emma George, left, said she had the opportunity to meet students she would have never crossed paths with otherwise.

The same qualities that Radwanski said made George a good tutor — her resilience and positivity — also helped George in the three undergraduate internships she had.

While working in Slama’s lab, George said, she sometimes felt like she didn’t know what she was doing. She said she appreciated Slama’s patience with her questions.

“He was so fostering of me learning,” she said. “It was less about getting to the final results and more about ‘let’s see where you get and what you can learn along the way.’ ”

In January 2022, George went to work in the lab of Dr. Katherine Wall, professor and chair of the Department of Medicinal and Biological Chemistry. She used the compounds she helped create in Slama’s lab and tested them on cells in Wall’s lab to see if they inhibited calcium release.

“It was fun to see both sides of the project,” she said.

Wall said George is a great role model for other students.

“Emma is not afraid to try something new,” Wall said. “She thought she might be interested in an industrial career, so she sought out an internship that would introduce her to industrial culture. She asks questions and thinks about her work in a broader picture.”

Her work in UToledo’s labs prepared her well for her industry internship last summer with W.R. Grace in South Haven, Michigan, George said. She worked in an analytical services lab, developing test methods for products to make sure they were safe.

“With my experience at UToledo, I knew the basics of working in a lab and was able to jump right in,” she said.

George plans to pursue a doctoral degree in medicinal chemistry and to continue asking “Why?”

“My career goal,” she said, “is to help develop treatments and cures to help those suffering with illness and to make an impact on how we approach drug design and development.”