Branigan Lyczkowski came to The University of Toledo because of her mother and grandfather, both of whom were Rockets.

Graduating Saturday with a bachelor of science degree in bioengineering, Lyczkowski also charted her own journey of personal growth during her time at UToledo.

What she’s most proud of, Lyczkowski said, are her accomplishments through the Roy and Marcia Armes Engineering Leadership Institute.

“Through this organization, I completed 24 hours of Dale Carnegie Training, improving my public speaking and networking skills,” she said. “I also completed several professional training modules such as insights, emotional intelligence and financial literacy. ELI has allowed me to develop myself further than even I thought possible as a young student. Using the skills I have learned throughout the years, I created and led a personal development session entitled ‘Refocusing your Energy’ with a fellow member.

Last spring, for example, Lyczkowski planned and hosted an engineering college-wide event consisting of a panel of distinguished alumni, something that would’ve once been almost unthinkable.

“I have gone from a shy girl who was afraid of speaking up to someone who has had conversations with distinguished alumni and company CEOs at events in the College of Engineering,” she said. “Through the support of the members of ELI, Dean Toole and Dr. Jon Pawlecki, I have grown out of my comfort zone and learned how to use my strengths in a way that makes me the best version of myself.”

Another extracurricular that has significantly impacted Branigan’s college career has been her involvement with the Filipino American Association (FAA). From performing the traditional Filipino dance “Sayaw sa Bangko” at a national conference to being a valuable member of the executive board, she immersed herself in a diverse and rich culture.

“It was through FAA that I truly began to appreciate diversity and learned how to become a champion of equity and inclusion.” 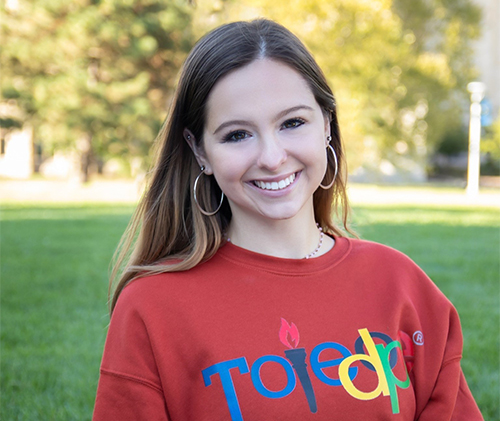 During her time in the College of Engineering, Lyczkowski had unique co-op opportunities: as a biomedical technician with TriMedX at Toledo Hospital, where she learned about medical devices and how to identify common problems the devices present to patients and physicians; as a materials and supplier engineer at Johnson and Johnson Vision Care in Jacksonville, Florida, which is where she “fell in love with engineering and knew that this career was the right path for my future”; and as a process engineer at Boston Scientific.

After graduation, she will join Boston Scientific as a full-time process engineer 1.

For the career opportunity and her success as a Rocket, Lyczkowski said has many to thank, particularly Dean Michael Toole, Dean of the College of Engineering, and Dr. Jon Pawlecki, Director of Student Services and Transfer Partnerships.

“There are so many people who have helped me throughout these past 4 1/2 years grow to become a well-rounded leader, engineer and student, but Dean Toole and Dr. Pawlecki have been influential mentors for me at UToledo,” she said. “They continuously presented me with opportunities that allowed me to develop myself and achieve my goals. They have always been there to answer my questions, connect me with any and all necessary resources and send positive encouragement.

“Both Dean Toole and Dr. Pawlecki have shown me how important it is as a leader to remain true to my values and continuously empower others within the team.”

Pawlecki said Lyczkowski has served as a great example to her classmates in the College of Engineering.

“She is an outstanding ambassador for the college and a role model to our students,” he said. “The many contributions that she has made as a student leader in the Roy and Marcia Armes Engineering Leadership Institute have been tremendous. I look forward to seeing how Branigan will apply her many talents throughout her career.”