Toledo sophomore cornerback Quinyon Mitchell was named to his second major All-America team on Monday, earning third-team distinctions from the Associated Press as a defensive back. 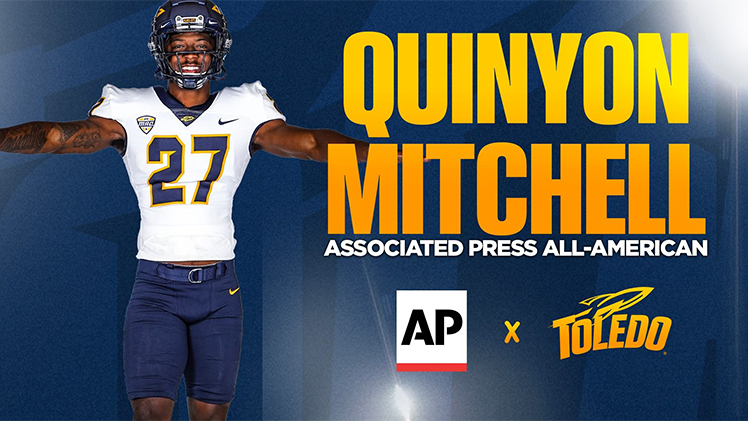 The Associated Press (AP) is one of the five All-America teams that are designated by the NCAA for determining “consensus” All-Americans. The other four are the Football Writers Association of America (FWAA), Walter Camp, the American Football Coaches Association (AFCA) and the Sporting News.

Mitchell is the first Rocket to receive multiple All-America nods from the five major teams since 2010. Eric Page earned All-America honors from Walter Camp and the Sporting News that season. The last AP All-American at Toledo was Brett Kern in 2007.

Mitchell is the nation’s leader in passes defended with 25 (five interceptions, 20 pass breakups). His 20 breakups is the all-time Toledo record, breaking the mark of 16 set last year by current San Francisco 49er Samuel Womack. Mitchell had three pass breakups in Toledo’s 17-7 win over Ohio in the MAC Championship Game on Dec. 3.

Earlier this season, Mitchell was named the Bronko Nagurski National Defensive Player of the Week by the FWAA for his record-breaking performance vs. Northern Illinois on Oct. 8.