The University of Toledo football team departed for the Bahamas on Monday, arriving at the Atlantis resort in the late afternoon for the first day of their trip at the Bahamas Bowl in Nassau. Toledo (7-5) will face Middle Tennessee State (6-6) at Thomas A. Robinson Stadium on Friday, Dec. 17 (Noon/ESPN). 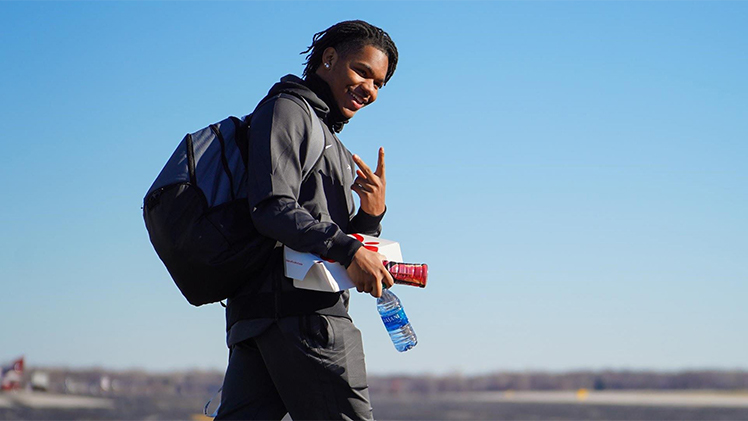 The Toledo football team departed Toledo on Monday afternoon to head to the Bahamas, the first day of its trip at the Bahamas Bowl.

The Rockets departed from Toledo Express Airport at 12:30 p.m., landing at Nassau Airport at 3:30 p.m., arriving at the hotel a short while later. Toledo will hold its first practice in the Bahamas on Tuesday morning at 9:15 a.m. Later in the day, the travel parties for both teams will attend a Beach Bash.

“This is a great experience and a great way to finish up our season,” head coach Jason Candle said. “Obviously a bowl game is a reward for a good season, and this gives us a chance to end the season the right way. We have 13 seniors we want to send out the right way with a victory. If you can have that experience and have some fun doing it, that’s the main goal.

“I’m looking forward to a great week here at Atlantis. The hospitality here is always first-rate.”

The Rockets will be playing in their 19th bowl game in program history and their sixth in the last eight seasons. Toledo enters its bowl game having posted three straight wins, most recently a 49-14 home triumph over Akron. Redshirt freshman quarterback Dequan Finn threw for 257 yards and four touchdowns in the victory, with junior Bryant Koback pacing the Rockets on the ground with 135 yards and two touchdowns.

Boosted by a strong end to the regular season, the Rockets enter the Bahamas Bowl leading the MAC in both scoring offense (34.2) and scoring defense (21.0). Toledo will be led by a strong core of players that earned 11 All-MAC honors, including five first-team selections: senior offensive lineman Bryce Harris, senior defensive backs Tycen Anderson and Samuel Womack, junior running back Bryant Koback, and junior outside linebacker Jamal Hines.

Middle Tennessee has won two of its last three games, including a 27-17 road victory at Florida Atlantic on Saturday, Nov. 27, that pushed the Blue Raiders into bowl eligibility.