Now that he’s graduated, Cody Lepiarz will join Kingston Health Care full time after completing three co-op rotations with the company during his time in the College of Engineering.

Lepiarz received his bachelor of science degree in computer science and engineering technology on Dec. 6, and said he looks forward to utilizing his strong technical and programming and software skills at Kingston Health.

He credits the support of his faculty for encouraging him to reach his goals and serving as his role models.

“Dr. Ngalula Mubenga and Dr. Yunsic Shim were extraordinarily smart and wonderful professors,” Lepiarz said. “I did not make their lives easy at times, but they challenged me and helped me reach my full potential.”

Mubenga described him as an extremely responsible student who overcame challenges and remained committed to his studies. 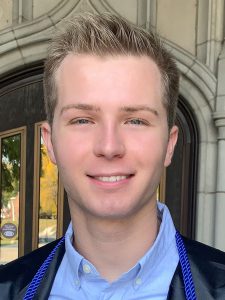 “Cody is a top-performing student, who does his best on every assignment,” Mubenga said. “His dedication and drive to succeed are a joy to watch.”

Lepiarz met his best friend in the College of Engineering and earned several recognitions, including being awarded the Engineers Week scholarship from the Toledo Society of Professional Engineers for 2020.

He also volunteered with the student mentoring program Lift-Off Toledo for several years.