Daniel Fant has gained something important since the 1980s: perspective.

First arriving at The University of Toledo in 1983, Fant wasn’t equipped with the right perspective to make the most of his college experience.

“I wasn’t mature enough to value the advanced education. Like a lot of kids, I went to school because I was told that was the thing to do, but I wasn’t ready,” he said. “So I didn’t take it seriously and left.”

But in the intervening years, Fant gained the skills he’d need to succeed in academia. He launched two successful careers — one as a law enforcement officer, the other running his family business in geothermal energy — while developing the life experience to thrive in a college classroom. Now 56, Fant will finally complete his degree in liberal arts with a concentration in conservation ecology.

His degree will complement his work, but that wasn’t the goal in his return to UToledo. Rather, he wanted to learn about humanity’s ongoing effect on the global climate and, more importantly, what can be done about it. 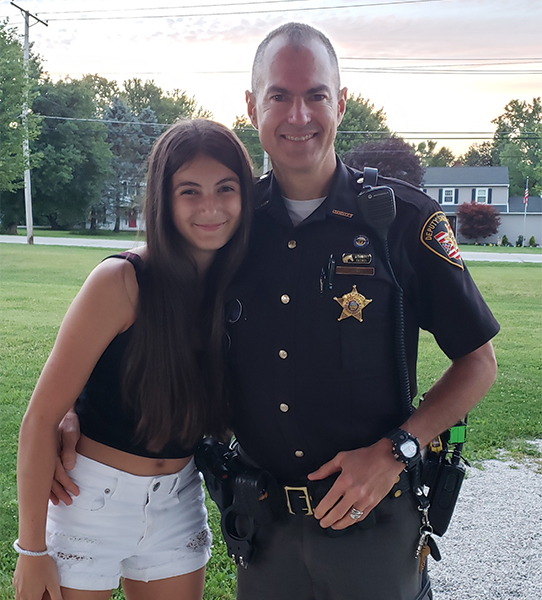 Daniel Fant and his daughter, Bianca Fant. Fant, who is a law enforcement officer and runs his family business in geothermal energy, first joined UToledo in 1983. And on Saturday, at 56, he will graduate.

“I believe that what we do now affects us today and future generations,” Fant said. “So getting a clear understanding of where we fit in and what’s happening with global warming, climate change, how human occupation affects our existence on earth and what we can do to make it better for the next generation — those are the kinds of classes I wanted to take.”

Although he’s finishing his degree with classes relevant to his interests, there have been challenges. Having a career and a family has sharpened Fant’s focus, but the classroom environment is still significantly different in 2021 than it was when he left UToledo in 1986. Then, the only computer he interacted with was a DOS machine — and that was only in one class. Adjusting to taking every class via a computer has been a change, and even if it’s not his preferred learning method, Fant appreciates the chance to finish his degree nonetheless.

“I miss the traditional environment of lectures and classroom, but if I didn’t have the opportunity to take a distance learning class, I would not have been a student.”

His diligence in his studies — traditional or otherwise — didn’t go unnoticed. Professor Michael Weintraub took note of Fant’s approach to bettering both himself and the world around him.

“Dan’s genuine enthusiasm in learning more about how the natural environment works and what we can do to solve environmental problems like climate change stood out to me,” Weintraub said. “Future Rockets should learn from his example that by taking an interest in how the world works and combining what you learn with your passion to improve your community you can make a real difference.”

Now ready to finish a degree decades in the making, Fant plans to put his interests into practice. With a renewed focus on renewable energy, he has already added a new product line to his geothermal energy business and plans to continue to advocate for green energy.