Charles A. “Chuck” Sullivan, one of The University of Toledo’s greatest and most consistent philanthropists, died Saturday, Dec. 18, with family members by his side at a long-term Roman Catholic facility with hospice care, according to a family spokesperson. He was 86.

Sullivan and his wife, Jackie, have been responsible for more than $14 million in contributions to the University, making them the second-highest donors in school history.

Perhaps the most significant donation from the Sullivans was a $5.5 million gift announced in July 2006 for the renovation of then-Savage Hall and the construction of the Sullivan Athletic Complex. At that time, the Sullivans also announced a donation of an additional $1 million to the University in the form of $500,000 for the Charles A. Sullivan Scholarship Fund in the John B. and Lillian E. Neff College f Business And Innovation and $500,000 to the Patricia Ann Sullivan Alumni Honors Scholarship Fund. 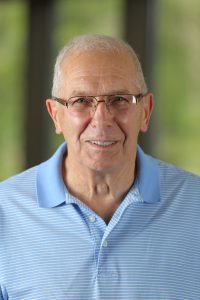 “Chuck was a close friend to me and so many others in Rocket Nation,” said UToledo Vice President and Athletic Director Mike O’Brien. “He cared very deeply about supporting the efforts of our student-athletes and really set the standard for supporting The University of Toledo and Rocket Athletics. The financial support that he and Jackie gave to Rocket Athletics over the years has helped our program build some of the finest facilities in the Mid-American Conference. I truly believe we would not have the Athletics program we have today without the support of Chuck and Jackie.”

The Sullivans’ $5 million gift in 2006 moved the renovation of Savage Arena from a hypothetical proposition to an imminent reality.

“It is very important to me that student-athletes have the best possible facilities in which to compete and practice,” Sullivan said at the time. “I also feel it is vital that students have the opportunity to enjoy Rocket sporting events, concerts and other events in a first-class, on-campus facility.”

Long-time supporters of the University, the Sullivans were deeply involved with the Glass Bowl Renovation Campaign in the late 1980s. The Sullivans have had seats in the Stadium Club since the renovation was completed in 1990. More recently, the Sullivans made the lead gift to the Rockets’ latest capital campaign, a $5 million renovation of the Larimer Athletic Complex. They donated $1.5 million, half of which went toward the Larimer project, while the other half was designated for the Coaches’ Incentive Endowment Fund.

The Sullivans’ support for Rocket Athletics went beyond the sports of football and basketball. Their first major gift to the Athletic Department was a $1.2 million donation in 2003 for the renovations of the outdoor track, tennis courts and soccer field.

A 1959 graduate of the UToledo College of Business, Sullivan was the retired chairman, CEO and president of Interstate Bakeries Corp. He served as the chair and vice chair of the UToledo Foundation Board of Trustees and was chair of the UT40 Campaign, which exceeded its $40 million goal.