The Toledo Rockets poured it on to beat the No. 24 Temple Owls, 32-17, in the rainy Marmot Boca Raton Bowl Tuesday night in Florida Atlantic University Stadium.

It was a wet and humid night, and UT experienced some tough sledding in the first quarter. The Rockets were held to just 28 yards of offense and failed to pick up a first down. 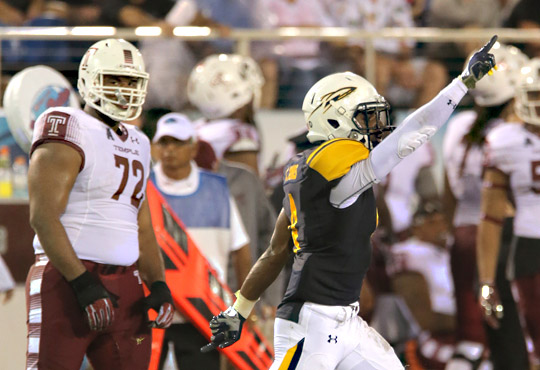 Junior wide receiver Corey Jones celebrated after pulling in a 26-yard touchdown grab to give the Rockets the lead in the second quarter.

The Owls got on the board first thanks to a 13-play, 40-yard drive that resulted in a 30-yard field goal with 73 seconds left in the opening stanza.

But early in the second quarter, UT sophomore linebacker Ja’Wuan Woodley forced a fumble during a handoff between Temple quarterback P.J. Walker and running back Jahad Thomas when the Owls were inside their own 10-yard line, and the ball rolled through the end zone to give Toledo a safety.

That made the score 3-2 at the 13:55 mark in the second quarter. And it ignited the UT offense, which needed just 46 seconds to score.

It became the Phillip Ely show. The senior Toledo quarterback threw for 168 yards in the first half. He spread the ball around to four receivers, completing 15 of 21 passes, including a 26-yard touchdown toss to junior wide receiver Corey Jones.

Freshman kicker Jameson Vest added the extra point to give the Rockets the lead, 9-3, with 12:16 to go in the half.

Toledo’s defense continued to hold the Owls, and the Rockets took a timeout with 1:15 to go in the second quarter to give the offense another possession before halftime. 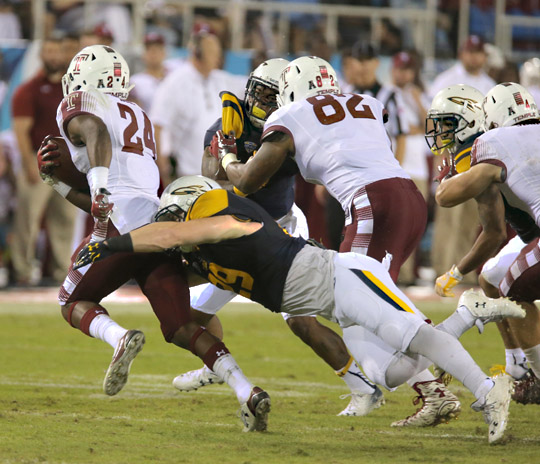 The Toledo defense held Temple to just 67 yards and three points during the first half.

UT started the drive on its 42-yard line. Freshman wide receiver Diontae Johnson pulled in an Ely pass, and then the UT signal caller completed another big throw to junior tight end Michael Roberts to put the Rockets on Temple’s 20-yard line.

After a short run by Kareem Hunt, Vest trotted on the field and booted a 39-yard field goal to give Toledo a 12-3 lead at halftime.

The Rockets held Temple to just 67 yards of offense in the first 30 minutes of the bowl game.

The Owls got the ball to start the second half and made it down to UT’s 25-yard line. But the Rockets hung tough, forcing the Owls to settle for a field goal to make the score 12-6 at the 11:33 mark in third quarter.

Temple cut UT’s lead to three points with another field goal to make it 12-9.

With the rain coming down in the fourth quarter, Toledo got the ball back on its own 20-yard line with 12:53 left in the game. 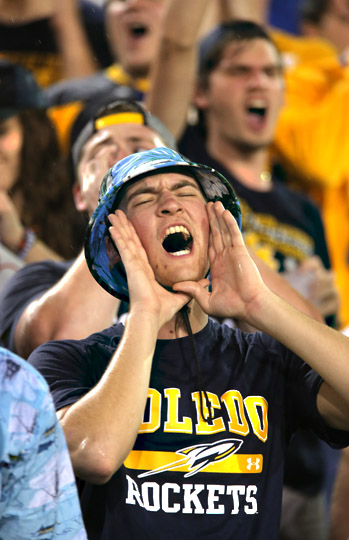 The Rocket faithful had a lot to cheer about during the nationally televised bowl game.

Ely launched a pass pulled down by sophomore wide receiver Cody Thompson who took the ball to the house for an 80-yard touchdown.

The Rocket defense came up big again when senior cornerback Juwan Haynes pulled down a tipped pass with a little more than 11 minutes left to play.

After sitting out the first half of the game for a targeting infraction during the UT-Western Michigan game Nov. 27, senior wide receiver Alonzo Russell stepped on the field and pulled in three passes during the ensuing drive; this included one just shy of the goal line. Hunt punched it in for the UT score with 5:46 left in the game to put the Rockets up 25-9 after the Owls blocked the extra point attempt.

Temple scored its first TD and added a two-point conversion to make it 25-17 with less than three minutes left on the clock.

The Rockets recovered an onside kick with 2:49 to go.

And Hunt added an exclamation point with a 41-yard run to score his second touchdown of the game to put the Rockets up 32-17 after Vest’s extra point.

The bowl win during the game televised on ESPN is the first victory for UT Head Coach Jason Candle, who had been an assistant coach for the Rockets for seven years before being named to the top spot Dec. 2 following Matt Campbell’s departure to Iowa State.