Tasting terroir, or a sense of place, isn’t only reserved for wine lovers drinking a glass of burgundy or champagne from France.

It’s evident, too, in the U.S. craft beer boom and the growing preference for local hops. 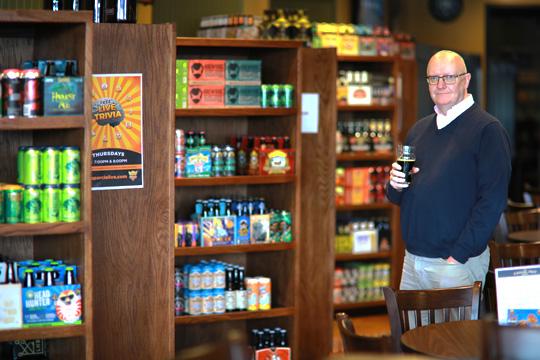 Hops, a key ingredient in making beer, is a crop making a comeback on farms across the country thanks to the incredible rise of the craft brewing industry over the past decade.

Craft breweries and their customers’ thirst for new, locally grown flavors are playing a big role in fueling an unprecedented geographic expansion of hop production across the U.S., according to researchers at The University of Toledo and Penn State University.

Their findings, which were recently published in the Journal of Wine Economics, suggest that as more craft breweries emerge around the country, so may new opportunities for farmers.

“It is fantastic to see the re-emergence of hop production in states which, at one point, had abandoned the crop,” said Dr. Neil Reid, professor of geography and planning at The University of Toledo, who teaches a class titled The Geography of Beer and Brewing. “Hops provide aroma and bittering characteristics in beer. Looking to differentiate themselves from Molson Coors and Anheuser Busch, independent craft brewers demand locally grown hops, experiment with different varieties of hops, and use more hops in beer production compared to mass-produced beers.”

The researchers found that the number of breweries in a state is associated with more hop farms and hop acres five years later. The number of hop farms grew from 68 to 817, and hop acreage expanded from 31,145 to 59,429 acres.

Before 2007, hop production in the country was limited to only three Pacific Northwest states—Oregon, Washington and Idaho. Hops are now produced in 29 states, according to the Hop Growers of America.

“Our study is the first to systematically show that the number of hop farms in a state is related to the number of craft breweries,” said Claudia Schmidt, assistant professor of agricultural economics in Penn State’s College of Agricultural Sciences. “It suggests that in areas where hop production is possible and not cost-prohibitive, breweries are expanding markets for farmers and providing an opportunity to diversify farm income.”

In fact, the growth positioned the U.S. as the largest producer of hops globally, both in terms of acreage and production.

Working with farm, brewery and climate data, the researchers developed a statistical model to determine whether new craft breweries in a state between 2007 and 2017 resulted in a larger number of hop producers and hop acres planted, by both new and existing growers in that state. They built a time lag into their model to identify the effect of new breweries over time. They also controlled for other variables that may influence farmers to start growing hops, such as average farm size, average net farm income and climate.

Their findings are correlational and do not point to a clear cause and effect. However, the time lag built into the model indicates that the growth in breweries preceded the growth in hop farms.

If more brewers are looking for hops grown nearby, then more farmers may be willing to try growing them, even if only on a small scale. For instance, in Pennsylvania, only 17 farms reported hop production in 2017, and their combined acreage is small — only 21 acres in all, according to the U.S. Census of Agriculture.

In contrast, in 2017, there were 100 acres of farmland devoted to hop production in Ohio. According to the Ohio Hop Growers Guild, there are more than 70 farms in Ohio that are growing hops.

While the growing of hops in states like Ohio and Pennsylvania is a relatively recent phenomenon, many Midwestern and Northeastern states have historical connections to the hop industry.

“In 1870, the three leading hop-producing states were New York, Wisconsin and Michigan,” Reid said. “A number of factors, including declining yields, disease outbreaks, high production and processing costs, and an inability to achieve economies of scale, contributed to the decline and disappearance of the hop industry in the Midwest and Northeast.”

Reid, who is affectionately known as “The Beer Professor,” is an expert on the craft brewing industry and its economic geography. His research is focused on the industry’s growth in the U.S. and its potential role in helping to revitalize neighborhood economies.

His previous research found that the craft brewery boom is good for home values. That study showed single-family homes in the city of Charlotte, N.C., saw their value increase by nearly 10% after a brewery opened within a half mile of the property, and center-city condos got a nearly 3% bump.

Reid will give the opening keynote address at the 2020 Beer Marketing and Tourism Conference Wednesday, Feb. 5, in St. Petersburg, Fla.

His new book titled “Agritourism, Wine Tourism, and Craft Beer Tourism: Local Responses to Peripherality Through Tourism Niches” will be published later this month. The book is co-edited with Maria Giulia Pezzi and Alessandra Faggian of the Gran Sasso Science Institute in L’Aquila, Italy.