In the midst of President Donald Trump’s impeachment trial and heading into the 2020 presidential election, a constitutional law scholar at The University of Toledo released a new book providing the first natural law justification for an originalist interpretation of the American Constitution.

In “Originalism’s Promise: A Natural Law Account of the American Constitution” published by Cambridge University Press, Lee Strang, John W. Stoepler Professor of Law and Values in the UToledo College of Law, provides a summary of the history of constitutional interpretation in the United States and writes a thorough and detailed description of how originalism operates in practice. 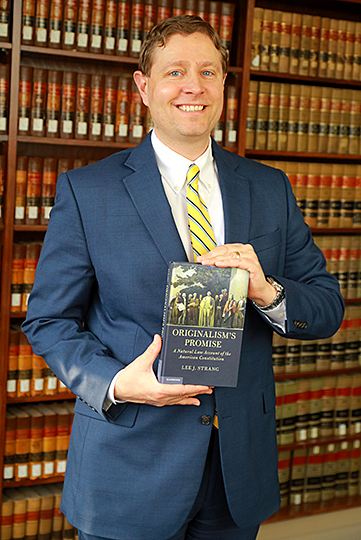 “This book provides an argument for how Americans should interpret the Constitution and offers a way out of the bitterness exemplified by the confirmation hearings for Supreme Court Justice Brett Kavanaugh,” Strang said. “Faithfulness to the Constitution’s original meaning is supported by sound reasons, reasons that help all Americans achieve their own human flourishing.”

The College of Law is celebrating the book’s release with a book launch that features a lecture by Strang Wednesday, Jan. 29, at noon in the Law Center McQuade Auditorium. The free, public event will be followed by a book signing.

Strang, who was a visiting fellow at the James Madison Program at Princeton University during the 2018-19 academic year, has published dozens of articles in the fields of constitutional law and interpretation; property law; and religion and the First Amendment.

“In this presidential election year, my goal is to inform Americans as they debate the Supreme Court’s future,” Strang said. “‘Originalism’s Promise’ is the product of more than 20 years of thinking through two common American commitments. First, Americans strive to be faithful to our Constitution. Second, and following the Declaration of Independence, many Americans are committed to some version of natural law. Together, these commitments suggest that Americans of all stripes should utilize originalism to interpret our common Constitution.”

In 2015, Strang served as a visiting scholar at the Georgetown Center for the Constitution.

Strang said the inspiration for writing the book stems from his experiences as a younger person attending political events with his parents, his education as a law student, and how vigorously Americans disagree about how to interpret the Constitution.

“I listened as politicians and activists argued that the Constitution supported their positions, so this book grew out of an attempt to identify how Americans can ascertain which claims are correct,” Strang said. “Also, as a student taking constitutional law classes, we did not study the Constitution’s text, structure and history. I remember we nearly always read Supreme Court opinions, which themselves rarely paid attention to the Constitution’s text. This book both criticizes and supports aspects of that educational approach.”