William Mason Bloom lost his leg to cancer in high school, but that didn’t stop him from joining the Rocket disc golf club.

And when Bloom’s cancer returned — including the presence of inoperable tumors in his neck that forced the early childhood education junior to sit out this semester to undergo chemotherapy — his teammates decided to help. 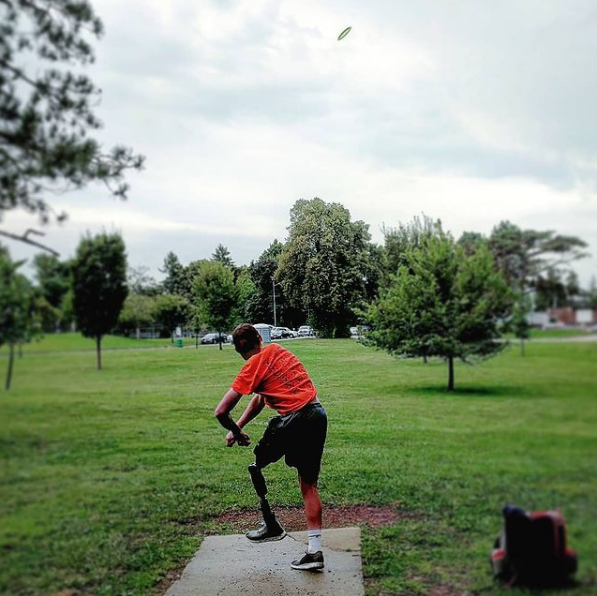 Competing with a prosthetic leg and maintaining indefatigable joy in the face of any obstacles, Mason Bloom has been an inspiration for his Rocket disc golf club teammates. Now his teammates want to help him.

They launched a fundraiser named for one of Bloom’s favorite phrases — “chain don’t break.” The Chain Don’t Break: Mason Bloom Charity Drive has raised more than $2,500 so far through a GoFundMe account and an upcoming disc golf event.

“Our goal is to raise as much money as we can for the Bloom family,” said Rocket disc golf club treasurer Chris Wojciechowski, a Ph.D. candidate in research and measurement.

“We want to make sure that they can get through anything they need to do to get Mason through treatment, back to UToledo and back with the game he loves. We don’t have any set goal — we want to take this fundraiser to the moon. Every dollar we can gather for this family. Not a dime goes to the club. This is purely for them.”

The disc golf event is scheduled from 10 a.m. to 4 p.m. Saturday, Feb. 20, at Ottawa Park Disc Golf Course. The event will be played from the short tees to give all skill levels a chance at prizes. Registration is $25. There will also be a raffle drawing and silent auction.

Competing with a prosthetic leg and maintaining indefatigable joy in the face of any obstacles, Bloom has been inspiring, Wojciechowski said. But that was not Bloom’s intention.

“I don’t think Mason gives you a chance to think of him as inspirational. Has he been? Yes. But the man is just so happy that you can’t help but feel that,” Wojciechowski said.

“There’s no chance to really recognize his disability beyond being frustrated that it is limiting him. He never seems frustrated by it. He never seems to be ‘pushing through’ it. He’s just putting in the work like everyone else.”