The Toledo women’s basketball team will face Houston Baptist in the first round of the WNIT on Friday, March 18, at 7 p.m. at Savage Arena.

The full WNIT bracket was released Monday afternoon after the 64-team field was announced Sunday night. The Rockets earned an automatic WNIT berth by virtue of their 2021-22 MAC Regular Season Championship. 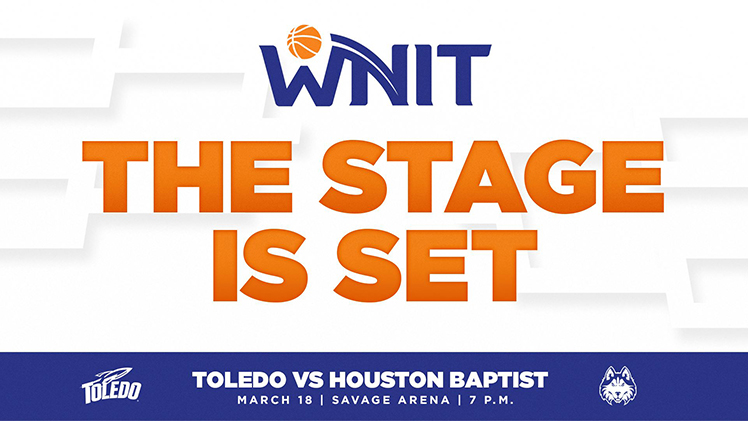 Tickets for the first round of the WNIT will go on sale Tuesday, March 15, at 9 a.m. and start at $15. Tickets can be ordered online by going to utrockets.com beginning Tuesday at 9 a.m., stopping by the Rocket Ticket Office located in the Sullivan Athletic Complex at Savage Arena, or by calling 419-530-GOLD (4653). All UToledo students with a valid ID will receive free admission.

Parking for the first-round contest will follow the regular-season parking guidelines. For donors and season ticket holders who have basketball premium parking passes, please use the “BKB Parking Postseason” pass in your parking pass booklets, in your digital account or on your parking card. Also, the Joe Grogan Room will be open to Rocket Fund donors.

Toledo is making its 12th WNIT appearance all-time and the eighth under head coach Tricia Cullop. The Rockets have advanced past the first round in 11 of 12 WNIT appearances and won the 2011 WNIT title.

Toledo finished the regular season with a 25-4 record and a historic 19-1 mark in MAC play. UT’s 19 conference wins are the most ever in a single season by a MAC team.

Houston Baptist brings a 16-10 record into Friday’s game and clinched a share of the Southland Conference Regular Season Championship for the first time in program history.

After earning a bye into the semifinals of their conference tournament, the Huskies fell to eventual tournament champion Incarnate Word, 54-33. Head coach Donna Finnie was named Southland Conference Coach of the Year and junior guard Timia Jefferson was named Player of the Year.