It may be surprising to learn that an elite Division I athlete like Nick Rosi was often sick as a kid. In fact, The University of Toledo offensive lineman spent so much time at the doctor’s office that he could have been given his own ID badge.

“I know that sounds crazy now, but he had horrible allergies and asthma as a child, and was constantly getting strep throat,” said his mother, Deana Rosi-Koeneman. “He was always going to the doctor for something, the poor kid.” 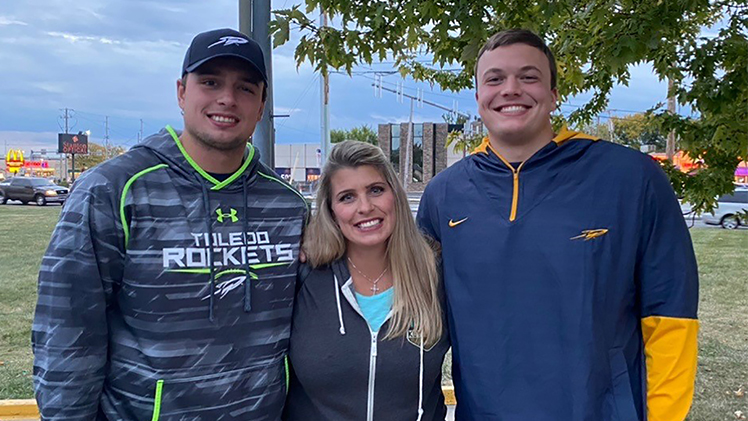 Nick Rosi (right) followed his brother Drew to UToledo to play football, but plans to follow his mother into the healthcare field.

Even simple procedures, like a tonsillectomy at age 11, turned into an ordeal for Rosi. Everything went fine with the procedure until he began spitting up blood at home hours after surgery. Rosi-Koeneman, a registered nurse, knew right away he was hemorrhaging.

“I called 9-1-1, the ambulance came and they took him to the hospital,” she recalled. “He had to have emergency surgery to have the tonsils fixed in the area that hemorrhaged.”

One silver lining for Rosi was that his various illnesses piqued his interest in the world of healthcare at an early age. His mother often would explain to him why he was getting a certain procedure, or how it would help him.

“I took an interest in all that stuff,” Rosi said. “Being around doctors and hospitals so much, I think it made me interested in healthcare in general.”

It’s no surprise then that he chose healthcare administration as his college major. Rosi will graduate with a bachelor’s degree in May, and then begin pursuing a master’s degree in public health.

Rosi eventually outgrew his penchant for getting sick, but he did continue to suffer his share of injuries on the football field. An ankle injury in his sophomore year of high school sidelined him for the entire season. It wasn’t until his senior year that he was back in top playing shape, putting him behind in the recruiting game. 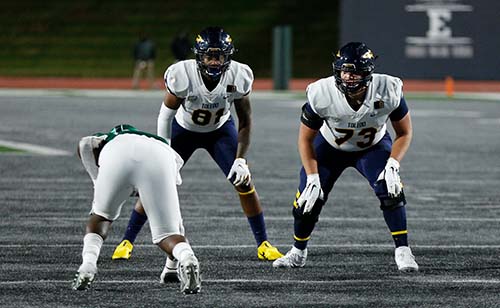 He came to The University of Toledo as a walk-on, joining his brother Drew, a tight end for the Rockets at the time. Both brothers followed in the footsteps of their father, Steve Rosi, an All-America tight end for Toledo in the mid-’90s who also works in a medical-related field as a pharmaceutical sales rep manager.

Unfortunately for Rosi, the injury bug followed him, too, as he missed all of last season with a foot injury. He is back in practice this spring in a limited capacity but said he expects to be 100 percent by summer training camp.

“I really wanted to just be with the team and move around this spring,” Rosi said. “I’m just excited for this summer and this next fall.”

He plans to take full advantage of his extra time on campus.

In addition to pursuing his master’s degree in public health, Rosi may also have time to pursue a second master’s degree in a related medical field before he leaves UToledo. He has also not ruled out following in his mother’s footsteps by going to nursing school when his football career is over.

In any case, Rosi said he has no doubt about his career direction.

“I’d like a career somewhere in the medical field, hopefully working with people,” Rosi said. “That’s the main reason I picked healthcare administration, to work with people in the healthcare field, maybe in a management position down the years. I just want to do something where I can interact with people and make a difference.”