When University of Toledo women’s basketball player Lexi Lance first arrived on campus, she did what any smart freshman would do – she observed the veteran players. She tried to emulate their preparation and practice routines in order to become a better basketball player.

When it came time for her to choose her major, Lance used much the same approach. Two of her older teammates – Tanaya Beacham and Kaayla McIntyre – were criminal justice majors. Hearing them talk about their academic experiences piqued Lance’s interests.

A four-year member of the Toledo women’s basketball program, Lance graduated with her bachelor’s degree in criminal justice over the weekend. After graduation, Lance will apply to police academies. Her ultimate goal is to work as a detective, investigator or even with a specialized unit like S.W.A.T. Lance said she is particularly interested in the investigatory role of police work.

“Putting all the pieces together to find a conclusion is really intriguing to me,” Lance said.

Tonya Rider, a former Toledo Police Department detective, has been Lance’s mentor for the last three years. Rider sees her mentee as an excellent candidate to be an investigator at a police department.

“Lexi is extremely observant,” Rider said. “She presents herself as a quiet person, but she knows how to talk to people, and she knows how to communicate well. Those are two things that are so important in law enforcement because you have to be able to navigate situations verbally before they escalate. Her demeanor and calmness will definitely be an asset.” 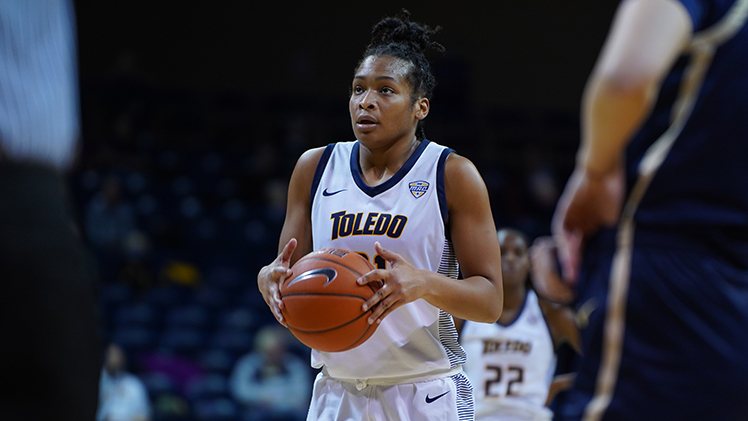 Lexi Lance graduated over the weekend with her bachelor’s degree in criminal justice.

Embarking on a career in law enforcement is a challenging goal, especially in the current social climate. For Lance, it’s a chance to be a positive role model and do some good for whatever community she will eventually call home.

“It’s all been very eye-opening,” Lance said. “With everything that’s happened over the last couple years and the prominent instances of police brutality, it makes me wonder, ‘What can I do? What would I do if I was in the shoes of that police officer?’

“You don’t see many police officers of color taking charge in situations, so being able to make a difference and see people in the community who look like me will hopefully have a positive impact.”

On the eve of graduation, Lance is excited to begin her new journey but said she will miss her time as a Rocket.

“It went by fast,” Lance said about her time at Toledo. “I went to play pickup with some of the players recently and it hit me that I won’t be here this summer working out. It’s surreal, but I’m grateful for the experience to play basketball here.”

Her gratitude is reciprocated by the women’s basketball coaching staff. Lance provided the Rockets with much-needed depth in the post during her career and was a model teammate for head coach Tricia Cullop since arriving on campus.

“I’m so proud of Lexi,” Cullop said. “She will graduate as a MAC champion, and we have no doubt she will be successful after graduation. We can’t wait to see what the future holds for her.”

Lance said her experience as a Rocket lived up to her expectations when she was first recruited by Cullop. The highlight of her four years was the 2021-22 season, which saw Toledo go 19-1 in MAC play and win the regular season title.

“The coaching staff and the fan base is what drew me here,” said Lance. “I went to a game (as a recruit) and saw all the fans in the stands and thought that was really cool. The team had a great family-like atmosphere. It made Toledo feel like home.

“My senior year was my most memorable. With everything we accomplished and all the records we set, it was a good way to go out.”