Outstanding Alumni to Be Recognized During Oct. 8 Homecoming Gala

The University of Toledo Alumni Association will roll out the red carpet for its distinguished graduates at the Homecoming Alumni Gala and Awards Ceremony on Friday, Oct. 8, at 5:30 p.m. in the Thompson Student Union Auditorium.

In addition to honoring alumni from UToledo’s colleges, each year three alumni are selected for the Alumni Association’s most prestigious honors: the Gold T, Blue T and Edward H. Schmidt Outstanding Young Alum Awards. Daniel Saevig is the recipient of the Special Recognition Blue T and Gold T award this year, an honor awarded only four times before. 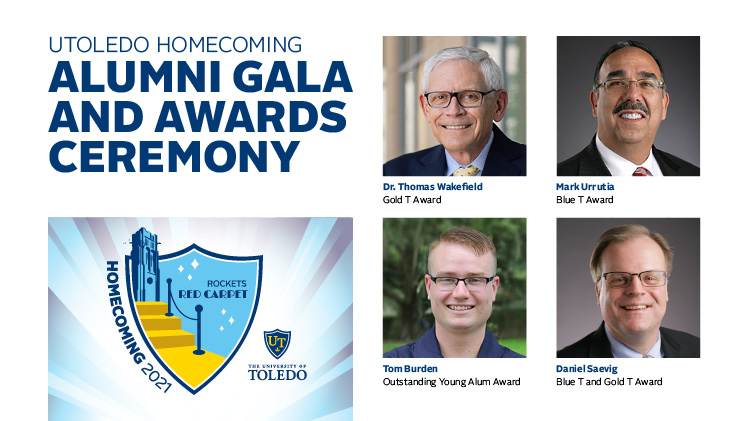 Tickets for the gala are $35 per person and a table of eight is $280. Each may be purchased by calling the Office of Alumni Engagement at 800.235.6766 or by visiting the UToledo Alumni Association website.

The Gold T award is presented to a University of Toledo graduate in recognition of outstanding achievement in her or his field of endeavor, while providing leadership and noteworthy service to the community.

The 2021 Gold T award will be presented to Dr. Thomas Wakefield, a 1975 graduate of UToledo and a 1978 graduate of the former Medical College of Ohio, who brings more than 40 years of expertise to his role as section head of vascular surgery service at the University of Michigan Medical Center, a position he has held since 2004. In addition to receiving the Blue T Award in 2018, he served as the Alumni Association’s president in 2014-15 and is a supporter of Rocket athletics, the Eberly Center for Women and The University of Toledo Medical Center.

Mark Urrutia, a 1988 UToledo graduate, is this year’s Blue T Award recipient. Since earning a marketing degree from UToledo, Urrutia has gone on to contribute to several organizations in northwest Ohio including the Rotary Club of Toledo, Latino Alliance of Northwest Ohio, Little Flower Catholic Church and United Way of Greater Toledo. For his professional leadership and service, he has been awarded and recognized by Junior Achievement, Pi Kappa Phi, the Boy Scouts of America and many others.

The Edward H. Schmidt Outstanding Young Alum Award is presented to a University graduate who is 40 years of age or younger in recognition of outstanding achievement in her or his field of endeavor, while providing leadership and noteworthy service to the Alumni Association, University or community. This award is named in memory of Ed Schmidt, a 1942 alumnus and a longtime supporter of The University of Toledo and its Alumni Association.

Tom Burden, a 2014 graduate of UToledo, is the 2021 recipient. An entrepreneur and CEO of Grypmat, he has appeared on ABC’s “Shark Tank” for his invention of a slip-free tool mat, capturing three Sharks, Mark Cuban, Richard Branson and Lori Greiner. From there, he has been included in Forbes’ “30 under 30,” and Grypmat was featured on the cover of Time magazine as one of the best inventions of the year and received “Gold” in the Workplace Solutions category of the 2018 Edison Awards.

Only awarded four times since its establishment, the Special Recognition Blue T and Gold T Award honors a member of the UToledo community who has showcased the combined qualities of the individual Blue T and Gold T awards through outstanding professional and personal achievements, leadership, and noteworthy service and involvement to the University, Alumni Association and the community.

Saevig, former associate vice president of alumni engagement, holds two UToledo degrees earned in 1984 and 1989 and served the University for nearly three decades. During his tenure, the association expanded its program offerings, increased membership totals and boosted donations throughout the Rocket community.

The William and Carol Koester Alumni Pavilion was constructed under Saevig’s leadership. It attracts thousands of alumni during the football season as a welcoming space to get a free hot dog and beverage before cheering on their beloved Rockets, just as Saevig did with his parents.

Saevig retired from his position on the Alumni Association team in March 2020. In retirement, he remains as busy as ever helping people including serving Oregon city schools as a member of the Oregon School Board.