Toledo enters the Mid-American Conference portion of its schedule against one of its top MAC West Division challengers: The Rockets host Western Michigan for Homecoming Saturday, Oct. 5, at 3:30 p.m. in the Glass Bowl

Toledo (3-1, 0-0 MAC) comes into the contest with some momentum. After a season-opening loss at Kentucky, the Rockets have won three straight games, most recently a thrilling 28-21 home win over BYU Sept. 28. Senior safety Kahlil set up the game-winning touchdown with an interception with less than a minute remaining. Junior running back Shakif Seymour scored on the next play, and the Rocket defense fought off the Cougars’ final drive. 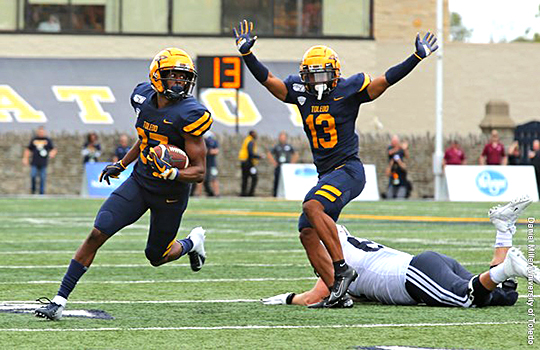 Senior safety Kahlil Robinson grabbed an interception that set up the winning touchdown
in Toledo’s 28-21 victory over BYU Sept. 28 in the Glass Bowl.

Seymour finished with a season-high 96 yards rushing to go with his two scores. Sophomore running back Bryant Koback chipped in with 88 yards as the Rockets ran for 242 yards as a team. Senior quarterback Mitchell Guadagni had another strong outing, completing 17 of 28 passes for 206 yards and one TD. He also rushed for 54 yards on 12 carries.

The game will be carried on ESPN+