May 2021 was supposed to be the end of an eight-year journey for Tess Posh. Instead, it became an opportunity to put what she’s learned in her occupational therapy doctoral program into practice.

“One of the big things of occupational therapy is being able to promote function and independence and balance in a person’s life,” Posh said. “And I was seeing that really wasn’t where my life was.”

Posh gave birth to her first child in late April, just as she was supposed to be bringing her studies to an end. But amid the challenges of completing her fieldwork during a pandemic and the challenges of pregnancy, she struggled to finish her capstone project.

“I was not the best version of myself. I wasn’t able to put forth my best effort and work because I wasn’t healthy in many ways, especially my mental health.”

She’d pushed through difficult times at Toledo before. Her mother had been diagnosed with terminal brain cancer shortly before Posh started her undergraduate studies, and ultimately passed away during the fall semester of her sophomore year.

With help from UToledo faculty, Posh kept her studies on track, even deciding to pursue a career as an occupational therapist as a result of her experience.

“I had seen what occupational therapists did with my mom,” Posh said. “It sparked my interest.”

She completed her undergraduate degree, joined her cohort in the occupational therapy program and was set to complete her studies in May. But facing the hurdle of being a first-time parent, she realized she needed help. Turning to several members of the faculty and her academic advisor for assistance, Posh said one message came through loud and clear. 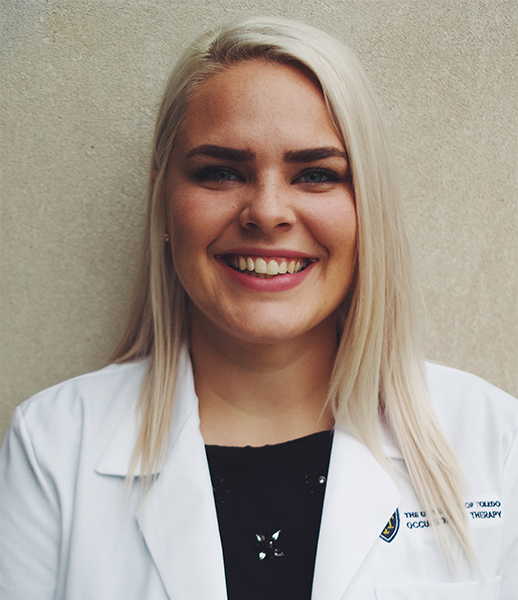 “They said, ‘You only get to be a first-time mom once in your life, so you need to protect that time, advocate for yourself and make the decision that makes you happy,’ ” she said. “ ‘Just know that we’re going to be here for you when you come back.’ ”

So, Posh stepped back, postponing her graduation to the fall semester while taking time to recover physically and mentally from giving birth — though she did get back to work on her studies fairly quickly, co-presenting a research project with another member of her cohort just a few days postpartum.

Now set to graduate, Posh credits The University of Toledo with giving her the support she needed to work through both the death of her mother and the birth of her child.

“It felt like The University of Toledo was going to support all aspects of my life. Faculty were able to understand that grad school is really important and being a graduate student is a big part of my life, but it’s not everything,” she said. “I am a person who has many different priorities and responsibilities outside of being a student, and thankfully, my faculty were able to understand that and support me.

But her faculty are equally quick to credit Posh for making a tough call. Associate professor Beth Ann Hatkevich said Posh’s willingness to take a step back should serve as an example to future students.

“Tess had to make some disheartening choices for her last semester in the occupational therapy doctoral program,” Hatkevich said. “Although Tess had to face these choices and take a detour with her educational goals, in the end, she proved to herself that she made the right choice.”

Even though it may have taken a few months longer than she planned, Posh will still finish the race she started years ago — and finish strong. Now living in South Bend, Ind., she’s ready to get to work.