Dr. Yusef Salaam, whose story is documented in the 2019 Netflix series “When They See Us,” will give the keynote address at The University of Toledo’s 36th annual Conference for Aspiring Minority Youth Saturday, Jan. 11.

Salaam was one of five teenagers of color, ages 14 to 16, wrongfully convicted of the 1989 beating and rape of a female jogger in Central Park. More than a decade later, a murderer and rapist serving a life sentence confessed to the brutal crime, and DNA evidence cleared the five, who were exonerated. 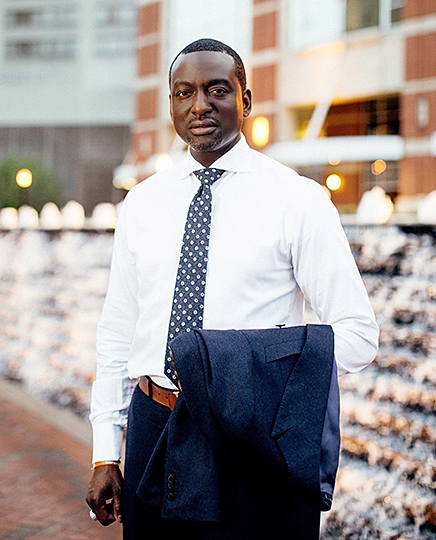 Sponsored by Toledo Excel and the UToledo Joint Committee, the conference for seventh- and eighth-graders, high school students and parents will start at 8:30 a.m. in the Thompson Student Union Auditorium.

“Social Justice: A Community Enterprise” is the theme of this year’s event.

“Dr. Salaam understands better than most that we have systems in this country that do not work equally for all of its citizens,” David Young, director of Toledo Excel and Special Projects, said. “However, he has dedicated himself to changing those systems as one of the leading advocates in the nation for criminal justice reform and change.”

In 2012, filmmaker Ken Burns made a documentary detailing the travesty; “The Central Park Five” chronicled the case from the perspective of the teens whose lives were changed by the miscarriage of justice.

Two years later, the quintet agreed to an approximate $40 million settlement from New York City to resolve the civil rights lawsuit over their arrests and imprisonment for the attack that made headlines around the globe.

Their story continues to educate and open eyes. “When They See Us,” a four-part miniseries, was released this year by Netflix and has received numerous awards.

“Since the day we were wrongfully arrested, others controlled the story about us without ever seeing us,” Salaam, an Innocence Project board member, said at the nonprofit legal organization’s 2019 gala.

Since his release more than two decades ago, Salaam has become an activist and inspirational speaker who addresses injustice and the importance of education, and facilitates discussions on race and class, prison reform, and capital punishment.

“This conference will educate students and parents about their basic rights and also advocate all attendees to be change agents where needed,” Young said. “We hope this will encourage a community and collective effort where social justice is needed.”

Following the keynote address, Salaam will participate in a panel discussion on social justice and criminal justice reform. He will be joined by RaShya Ghee, UToledo graduate, adjunct professor at the UToledo College of Law, and staff attorney at Advocating for Opportunity; Albert Earl, cultural educator and prevention education specialist; and UToledo Police Chief and Director of Public Safety Jeff Newton. Rhonda Sewell, manager of external and governmental affairs at Toledo Lucas County Public Library, will moderate the session.

Toledo Excel was established in 1988 to help underrepresented students, including African, Asian, Hispanic and Native Americans, for success in college. Through summer institutes, academic retreat weekends, campus visits and guidance through the admission process, students increase their self-esteem, cultural awareness and civic involvement.

Toledo Excel is part of the Office of Multicultural Student Success, which is in the Division of Student Affairs. The UToledo Joint Committee includes representatives from the University, Toledo Public and Parochial schools, and civic and community leaders from the city of Toledo. The mission of the committee is to bring together people in the community interested in the education of underrepresented youth. The UToledo Joint Committee also serves as an advisory board and support system for Toledo Excel.

Advance registration for the free, public conference is required; go to the eventbrite website.