The top six finishers will be offered a spot on the USA Track & Field team for the 2020 Pan Am Cross Country Championships. 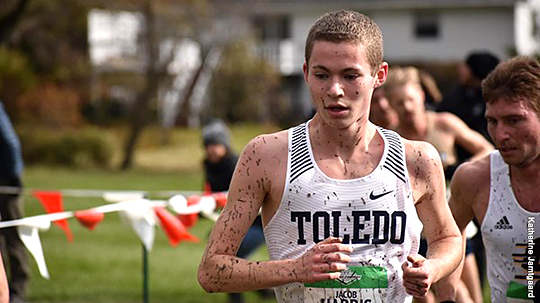 Jacob Harris placed sixth at the Mid-American Conference Cross Country Championship and was named Freshman of the Year.

“We are really looking forward to Jacob racing at the USA Junior Cross Country Championship in San Diego this weekend,” said Assistant Coach Nick Stenuf. “Coming off of his freshman season that saw him place sixth at the Mid-American Conference Championships and earn Freshman of the Year honors, we knew he was ready and fit enough to go and compete with the best [under 20] distance runners in the U.S.

“It will also be a great experience for him on the national level, as well as a great representation for Toledo and what we expect for the men’s program going forward,” Stenuf added.

Harris is coming off an impressive rookie campaign last fall. In his collegiate debut at the Northern Illinois University Huskie Challenge Sept. 6, he captured the individual title with a time of 25:52.1, helping the Rockets to a fourth-place finish. The Toledo native was the first Rocket to cross the finish line at the MAC Championships, stopping the clock at 25:42.3 to place sixth. Harris’ top-10 finish earned him First-Team All-MAC and MAC Freshman of the Year honors.

At the NCAA Great Lakes Regional Nov. 11, he set pace for the Rockets with a time of 31:48.2 to place 54th overall and help the Rockets to a 17th-place team finish.