The leader of the country’s Environmental Protection Agency toured UT research facilities Thursday during a visit to the region to learn about Toledo’s green energy economy.

U.S. EPA Administrator Gina McCarthy told the group of UT faculty and students, as well as colleagues from Bowling Green State University invited to attend the tour, that she was excited to be there to celebrate the work underway to advance clean energy. 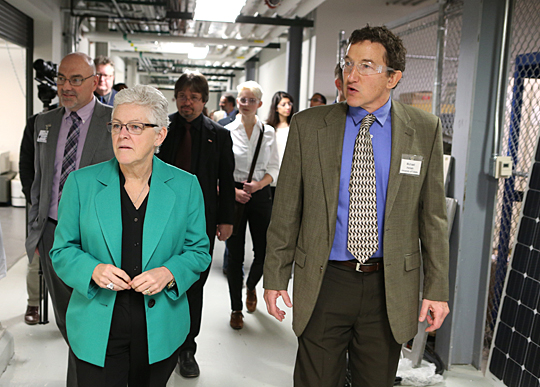 “I’m really out to highlight what’s going on here and throughout Toledo in terms of real investments and really thoughtful ways of systemically looking at how we move energy toward a cleaner energy future,” McCarthy said, adding that President Obama noted in his recent final State of the Union address the need to make this shift and the opportunities it presents.

“The way solar has grown in this country is unbelievable. It is just staggering how much faster, like up to 12 percent faster than any other job sector in the U.S. That’s where solar is,” she said. “To come to Toledo and find 6,000 people in this area actually having jobs in the solar industry and the work that you’re doing to train and to lower the cost of solar, that’s where the difference is going to be made.”

During the tour of the Wright Center for Photovoltaics Innovation and Commercialization at UT where faculty and students work to develop and evaluate materials used in solar cells, the EPA administrator thanked the group for its research efforts.

“Thank you for doing what you do,” she said. “It is incredibly important work.”

“What we are working to do here at The University of Toledo is highlight the fundamental research and technology that leads to innovations that impact the real world,” said Dr. William Messer, UT vice president for research. “That is what the Photovoltaics Innovation and Commercialization is doing, and Administrator McCarthy recognizes the contributions we have made in the solar industry.”

During her visit to the region, McCarthy also stopped at Owens Community College to tour vocational training labs and First Solar to see its manufacturing plant and research center.