If we’ve learned anything from the blackout at Super Bowl XLVII, it’s that lighting has a critical role in live entertainment.

Going into the NBA All-Star Game, a University of Toledo faculty member has accepted the responsibility as part of the team in charge of lighting the stage for halftime performer Sting, the former frontman of The Police, the pre-game performance by Cirque du Soleil, and other All-Star Game events. 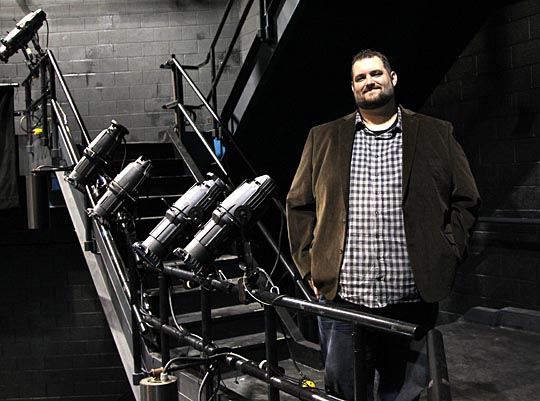 Stephen Sakowski, UT assistant professor of lighting and sound design in the Department of Theatre and Film, will work closely with Otis Howard, an Emmy Award-winning lighting designer who runs Otis Howard Design Inc., a company that has lit the stage for TV shows on BET, VH1, MTV, HSN and more. Howard has been in charge of lighting the NBA All-Star events for the last five years.

Sakowski first began working alongside Howard during an internship in college.

“I really like working with Otis,” Sakowski said. “He’s been a mentor of mine in the industry since I met him.”

After graduating from college at Otterbein University, Sakowski freelanced in New York City for several years before getting his master’s degree from the University of California at San Diego. He joined UT’s faculty last year.

“Teaching lighting design, there’s theories and approaches, but so much of this job is real-world experience and application,” Sakowski said.

He added that doing these projects provides a sense of accreditation for his students, because they can see the experience he has in the field and the work he does. He also is exposed to some of the best technologies and techniques in the industry, and he then can teach these to his students.

Sakowski routinely does production coordinating remotely for Otis Howard Design by working on technical drawings and lighting plots. But for this large national event, he will travel to Toronto to ensure it goes off without a hitch.

“It’s nice to be a part of something on this scale because it’s reaffirming that I’ve made good choices along the way,” Sakowski said.